​JJ MAKES A STAND FOR THE LEGENDS - DAY 1 REVIEW

1986 World Champion Joe Johnson rolled back the years as he, along with qualifiers Peter Lines, Aidan Owens and Jonathan Bagley, advanced to Thursday's Quarter-Finals.

Johnson opened up this year's revamped championship with a sensational 3-0 upset win over the much fancied Patrick Wallace, who was heavy odds on to win the match and third favourite to win the whole event.

The victory will have meant a lot to the 64 year old as he had lost his opening match in the last six previous World Seniors. Next up for him is John Parrott tomorrow afternoon.

​Newbury qualifier Lines ousted the opening frame on the pink and never really looked back as he registered a 3-0 success.

Along with Stephen Hendry, the bookmakers have made Lines favourite for the title come Friday evening. Dennis Taylor will be his opponent in the Last 8.

​The evening session at the Baths Hall saw Number 8 seed Willie Thorne make his return to competitive snooker (of sorts) for the first time in around 15 years. He lost the first frame to Owens, but held his own when claiming a low-scoring second frame.

However, rustiness started to tell. With Owens a very keen competitor on the amateur scene, his sharper match game was enough to wrap up a 3-1 win.

On paper, the closest tie to call appeared to be that of Tony Knowles and Bagley, but the qualifier got off to a great start chalking up both the opening frames with hardly any reply.

However, the former World Number 2 responded superbly with breaks of 52 and 47 to level things up at 2-2 and force a thrilling re-spotted black for the match.

Knowles won the toss and predictably put his opponent in first. Bagley played the conventional balls to both side cushions shot, although neither ball finished tight.

Tempted, Tony went for a double into the pink pocket, but missed. The pace he played it at forced the cue ball near the baulk cushion, but left the black virtually hanging over the bottom right hand pocket. Bagley made no mistake in depositing it and booking his berth in the Quarters against the oldest player in the event, Cliff Thorburn.

Written and published by Michael Day on the 22nd March 2017 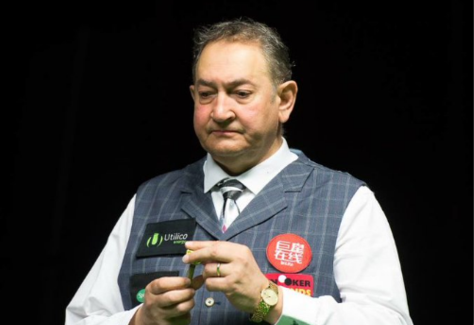