Peter Lines was in fantastic form emerging as the first of four qualifiers to take their place in the main draw for the new World Seniors Snooker Championship next month.​ The 47 year old from Leeds will line up alongside greats of the sport including seven times World Champion Stephen Hendry.

​A healthy field of 60 entries travelled to the Crucible Sports & Social Club in Newbury for a chance at glory. Similar to a PTC / Euro Tour format on the main circuit, each half of the draw played out their opening two rounds on the Friday and Saturday, before the Last 16 commenced as a whole on the Sunday. It was straight knockout, Best of 5 Frames matches throughout, although a 'Black Ball Tie Breaker' would decide the outcome if the score reached 2-2.

Lines, who was a professional for 22 seasons, beat Richard Emery and former Quarter-Finalist of this championship (in a previous form) Karl Townsend to make 'Finals Day'.

He returned to then beat Barry Pinches 3-0 in the Last 16, came back from 2-0 behind to oust Rhydian Richards in the Quarters and then crafted breaks of 95, 71 and 70 to beat Nick Spelman 3-1 in the Semis.

However, Lines was simply superb in the final, constructing runs of 69, 71 and 139 in a 3-0 win to take the trophy and a spot in the 12 player field at the Baths Hall in Scunthorpe between 22nd to 24th March.

The Newbury Qualifier featured a number of well known snooker names from the past and present. It also saw Snooker presenter and enthusiast Andy Goldstein try his hand too.

​The World Seniors Snooker Championship has been revamped by Jason Francis and his 'Snooker Legends' team. The inclusive concept means anyone aged 40 or over who currently doesn't have a professional tour card is allowed to enter the qualification events.

The 8 seeded players will be joined by the 4 qualifiers. The invited names at the venue are Cliff Thorburn, John Parrott, Dennis Taylor, Joe Johnson, Patsy Fagan, Tony Knowles, Willie Thorne and Hendry.

​Not only will the overall champion trouser a £10,000 payday, but also a place in the World Championship Crucible Qualifiers at Ponds Forge, Sheffield. Potentially, it means anyone could make it all the way to the most famous venue in the sport, and possibly even win the ultimate prize!

​The next three weeks will also see qualifying heats in Leeds, Germany (Nuremberg) and Dublin (Republic of Ireland).

It will be very interesting to see how far Lines can go in Scunthorpe. Despite being relegated off the tour only last season, he has remained very active within the top tier as a 'Q-School Top Up' player. He notably defeated defending champion Neil Robertson in the First Round of the UK Championship before Christmas.

Lines will surely be one of the favourites to win it.

Written and published by Michael Day on the 19th February 2017​ 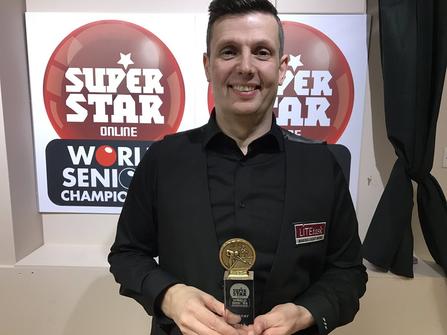