OWENS STAMPS HIS PASSPORT THROUGH

Aidan Owens (above, left) became the third qualifier for the venue stages of the revamped 2017 World Seniors Snooker Championship later this month.

Following on from the success of Peter Lines and Jonathan Bagley during the opening two events in Newbury and Leeds respectively, the qualification process moved across to the continent and into Germany.

A small, but enthusiastic field assembled for the two day knockout tournament. Owens reached the final without dropping a single frame when eliminating Thomas Blang (3-0), Thomas Cesal (3-0) and Gary Filtness (3-0).

His opponent in the final was Phil Barnes, who himself hadn't lost a frame on route either. Something had to give in the conclusion.

Barnes took the opening frame but it was Owens who then chalked up three frames straight, which culminated in a doubled re-spotted black for the 3-1 win.

A regular England representative in Senior international competitions, Owens came close to qualifying in Newbury before losing to English Amateur Champion Jamie Bodle in the Semi-Finals.

The last of the four qualifiers will take place next weekend in Dublin, Republic of Ireland. It will be the final opportunity for players to line up alongside greats of the sport, including Stephen Hendry, during the 21st-24th March.

The overall champion at the Baths Hall will claim £10,000, the title, the trophy and a place at Ponds Forge for World Championship Crucible Qualifying.

Written and published by Michael Day on the 5th March 2017 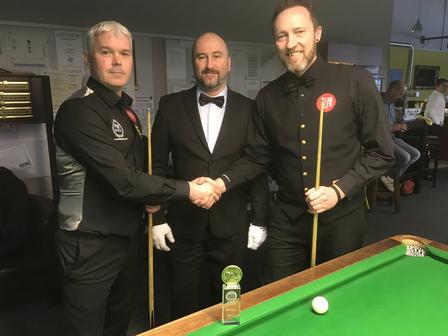