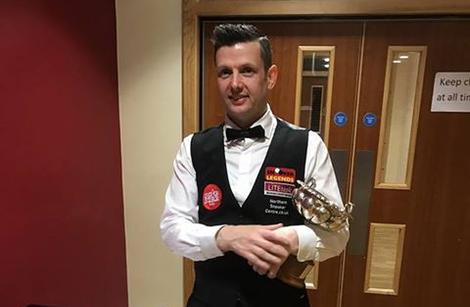 Peter Lines lived up to his tag of being the pre-event favourite by beating John Parrott 4-0 in the final to become the 2017 World Seniors Snooker Champion.

In reality, 47 year old Lines was pretty much a cut above the rest throughout the entire process of this year's revamped championship. He didn't drop a single frame during his quartet of matches in Scunthorpe.

Lines qualified at the first possible avenue in Newbury to book his place at the Baths Hall. This week he enjoyed 3-0 victories over 1977 UK Champion Patsy Fagan in the Preliminary Round and then 1985 World Champion Dennis Taylor in the Quarter-Finals.

That win set him up a clash with seven times World Champion Stephen Hendry, who was making his competitive return after an absence since 2013 where he appeared in this tournament (under its old format). Hendry had struggled the night before to advance; requiring a black ball tie breaker to oust qualifier Aidan Owens 3-2.

Despite not currently holding a professional tour card, Lines is a very active player who has played in many pro tournaments this season as a 'Top-Up' entry. It was probably this match sharpness that helped him beat the Scot 3-0. He took the first and second frames on the blue and brown respectively before finishing off with a 69 break in the third.

It was a result that would extinguish any hopes of a Crucible return for Hendry.

Earlier in the afternoon session, Parrott booked his berth in the final courtesy of coming out on top in a thrilling climax against another qualifier in the form of Jonathan Bagley.

In a largely scrappy affair, the 1991 World Champion recovered from being 1-0 and 2-1 down. Bagley couldn't convert an opportunity on the colours in Frame 4, which eventually saw Parrott sink pink and black to force the tie-breaker.

Bagley won the toss and predictably put his opponent in. After Parrott had played both balls to opposite side cushions, he failed in attempting a double. With the black in the centre of the table and the cue ball near the top cushion, the Liverpudlian stepped up and sensationally cracked in a long range black.

Despite the really positive way Parrott progressed to the final, Lines was just too strong, as he powered to a comfortable and comprehensive 4-0 victory.

Not only did it earn Peter the title, trophy and a £10,000 payday, but also a spot in the World Professional Championship qualifiers at Ponds Forge in a couple of weeks time. With World Snooker unlikely to be dishing out invites to Q-School Top Up players (of which Lines may have featured as), it is a terrific opportunity to be awarded.

Organised in a relatively short space of time, this event was undoubtedly a success - especially when you consider it was looking like there would be no World Seniors this season at all.

Like most new ideas, there were a couple of things I'm sure would be done differently. I personally don't mind shot clocks in things like the Shootout and formerly the Premier League, but I don't think it suits this format - I believe it had an effect on a few shot choices for Bagley in his Semi-Final. I do however appreciate time and the schedule being a big factor, though, along with the live 'in the arena' commentary which has been one of the trademarks of the Snooker Legends Exhibition circuit.

It is great news that the championship will return next year, and will be expanded to accommodate 16 players - 8 of which being qualifiers. An extra day at the Baths Hall will also be utilised.

Written and published by Michael Day on the 25th March 2017