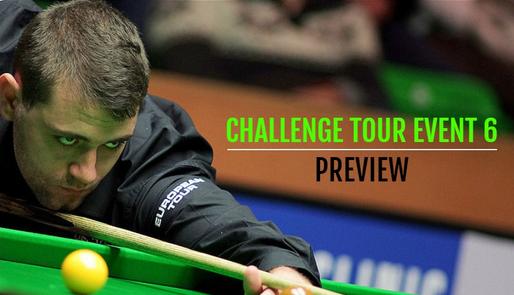 The latest leg of the new World Snooker Challenge Tour takes place across Thursday and Friday this week in Lommel, Belgium.

Now into the second half of the ten-event tour, eyes are on the rankings list which will determine the top two players who will earn professional tour cards for at least the 2019/20 and 2020/21 campaigns.

The two players currently in possession of those sought after tickets are Event 4 winner Mitchell Mann (£4,700) and Event 1 champion Brandon Sargeant (£4,600).

David Grace (£3,525), who claimed the second event in Preston, sits in third, Riga winner Barry Pinches (£2,625) is fourth, whilst the latest victor on the circuit from Derby a few weeks ago, David Lilley (£2,200) makes up the top five.

Disappointingly, there are just 40 players in the draw for Event 6. Remember, the capacity for each event was supposed to be 72. There are 8 matches in a preliminary round, whilst the remaining 24 players are already in the Last 32.

Looking at the draw, the interesting thing to note is that the top 5 in the rankings are all in a stacked bottom half of the draw.

In a notable Last 32 tie, Mann will face the winner of either Pinches or Jackson Page. 17-year-old Page is still in the promotion picture as he sits in eighth place on £1,625, but he has already lost to Pinches twice during the Challenge Tour, including the Event 3 final in Latvia.

​Sargeant plays eleventh placed Daniel Womersley and Grace meets the winner of Joshua Cooper or Christopher Keogan. ​Lilley, who has played in just two events so far, crosses cues with John Foster in a preliminary match.

With the composition of the draw, those in the top half may feel there is an even better chance to go deep. The highest ranked to feature there is sixth placed Steven Hallworth who plays Jake Nicholson in a Last 32 fixture.

Despite the low numbers there is a cosmopolitan feel to the entries with players representing France, Ukraine, Germany, Hungary, Austria and India scheduled to take part. ​

You can view the full draw and results via snooker.org here.

The image above is courtesy of World Snooker