Following on from our first series last season, we're back for another installment of Pro Snooker Rookie Watch where we keep a close eye on the players making their top tier debuts throughout the 2018/19 campaign. There are 12 rookies this season.

With back-to-back ranking tournaments over the next two weeks in China and then Belgium, we thought this would be an ideal chance to see how the newbies are getting on before the busy autumn and winter months take place.

​Statistically the best performer so far is European Amateur Champion Harvey Chandler, who has banked £9,725. The 23-year-old Englishman has enjoyed a solid start with Last 32 and 16 finishes at the World Open and Paul Hunter Classic respectively.

Not far behind is Q-School graduate Ashley Carty who is on a guaranteed £9,000 at the moment, but has scope to increase that as he has qualified for next week's China Championship and the rescheduled Indian Open. Carty also defeated Anthony McGill on his way to reaching the Last 32 of the Riga Masters.

18-year-old World Snooker Federation Champion Luo Honghao will be engaged over the next fortnight after qualifying for both the China Championship and the subsequent European Masters in Lommel. Currently on £7,000 minimum, he too like Carty could overtake Chandler in top spot. He got the better of countryman Zhou Yuelong to make Guangzhou.

European Under 21 Champion Simon Lichtenberg of Germany did not get through to Guangzhou or Lommel, but he does have £4,600 next to his name on the rankings. The 20-year-old eliminated 1997 World Champion Ken Doherty in Preston when he qualified for the World Open and on home soil he defeated amateur Wayne Brown 4-3 to reach the Last 64 of the Paul Hunter Classic in Furth.

One of two EBSA Play-Off winners - and the current English Amateur Champion, Joe O'Connor has made a very decent start to his professional career and has £4,000 in the bag. He claimed a brace of wins in, and made the Last 32 of both the Riga Masters and Paul Hunter Classic. O'Connor's First Round match at the China Championship has been held over to the venue where he faces defending champion Luca Brecel on Monday.

CBSA Chinese Tour qualifier Zhang Jiankang has pocketed £3,600 at present; this comprises of a match win in Furth and a guaranteed payday coming up in Belgium.

The only other Q-School graduate rookie this season is Kishan Hirani. He has played in all six ranking events so far where he lost in the opening round five times, four of those without winning a frame. He does however have prize money to his name, £600 to be exact, for his deciding frame win over fellow Welshman and rookie Jamie Clarke in Germany. Hirani lost to Craig Steadman 4-0 in the following round.

​The five remaining rookies are yet to register a debut professional win.

After several very close and painful misses to earn his professional status, Clarke finally realised his dream last April when coming through the EBSA Play-Offs in Sheffield. The step up, though, has not been fruitful as yet. He has lost all six matches, but he should remain positive that three of them were only the result of a deciding frame.

This is a similar story for WSF Finalist Adam Stefanow and Chinese Tour qualifier Chen Feilong, who are both zero in six as well. Stefanow was close, though, taking Rory McLeod and Stephen Maguire all the way in frames.

2017 World Under 21 Champion Fan Zhengyi has found his introduction to the top tier tough. The 17-year-old entered all events and has lost every one (he withdrew from the PHC). Fan was a wildcard for the recent Shanghai Masters invitational, but lost 6-0 to an impressive Stuart Bingham.

African Champion Mohamed Ibrahim has yet to make an appearance on the professional circuit.

​Which of the rookies have impressed you so far? Let us know via Social Media. 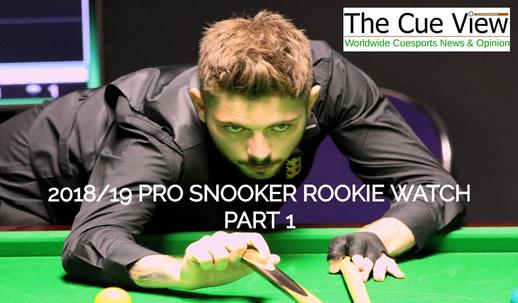