Following Runner-Up finishes in 2015 and 2016, England's Hamim Hussain made sure it was third time lucky as he won the 2018 European Under 17 Open on Thursday.

Celebrating its 12th annual edition, this year's event featured players representing England, Belgium, Sweden, Slovakia and the host nation, Malta. Luca Brecel is a previous champion of this tournament having won the inaugural staging in 2007.

Hussain had to recover from an opening day 3-2 defeat to Isa Ishtiaq (England) by winning his other two group games and qualifying for the Quarter-Finals Knock-Outs.

There he eliminated Paul Deaville (England) 4-0 and Joe Fenton (England) 4-3 in the Last 8 and 4 respectively.

His opponent in the final was Belgium's Sybren Sokolowski, who comprehensively advanced top from his group without dropping a frame after a trio of 3-0 victories.​ He then defeated Kayden Brierley (England) 4-1 and Ishtiaq 4-2 for his final berth.

After a close opening frame in which he doubled the black, Hussain became too strong there, though, and he emerged a 5-0 winner.

​Picture above is courtesy of Edwin Sokolowski. I'd also like to thank Edwin for information he provided too.

Written and published by Michael Day on the 11th January 2018​​​ 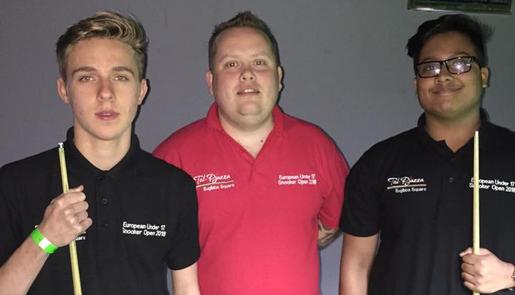