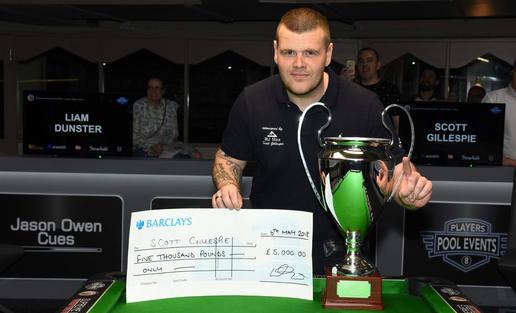 Scott Gillespie became the first ever winner of an event on the historic Supreme Pool Series after he came from behind in an-all Scottish final to win the Jason Owen Open; the curtain raiser to an eagerly anticipated season of tournaments.

Bringing together top players from both sides of the English 8 Ball Pool divide - which includes the return of some of the sport's greats, this five event series boasts over £150,000 in prize money across the year, including a record-breaking £51,000 to the winner of the Grand Finals at the conclusion of the campaign. To find out more on the series as a whole, please visit here.

The multi-talented Gillespie, a former Nations Cup Blackball Champion, went into the tournament with positive memories of the Players Pool Lounge venue having reached the final of the Supreme Masters which was staged there last year. He began his long journey to the title on Friday dropping just six frames in total when defeating Mark Astbury and Mason Penny.

Returning on Saturday he continued his brutal assault with an 11-3 success over a former World Champion in John Roe and then an 11-4 win over last year's Challenge Winner Shaun Storry.

​His undefeated run was halted in the Winners Qualification Round when he went down 11-4 to IPA Number 1 ranked player Marc Farnsworth. However, Gillespie re-grouped on the Losers Side to see off the evergreen Phil Harrison 8-5, another one of the hot favourites (and another former World Champion) going into the weekend.

The Last 8 of the event was randomly drawn and effectively re-set with all players now facing a straight Knock-Out. Gillespie was able to extract instant revenge on the previously undefeated Farnsworth - eliminating him 11-5, he then secured a berth in the final with spare change again when beating Northern Irish legend Ronan McCarthy 11-6 in the Last 4.

Fellow Scot Liam Dunster, the reigning B.I. World Champion, had an identical route when qualifying from the Double Elimination phase. On his way to the Winners Qualification Round he upended Rob Wharne and Greg Batten - both winners of major events at the venue in 2017. Former World Masters winner Neil Raybone pushed him to the B Side, but Dunster managed to get the better of ex-World Champion Adam Davis, 8-5, to make the final octet.

​There Dunster recorded a brace of massive victories over current US Open 9 Ball Champion and fellow countryman Jayson Shaw (11-4) and then pre-tournament favourite Tom Cousins (11-10) in the Quarters and Semis respectively. Against two-time WEPF World Champion Cousins, Dunster recovered from 10-6 down.

With the odds unable to split them before the final, the opening eight frames were shared, but Dunster pressed on the accelerator to go 7-4 up.

However, Gillespie went on to claim 7 of the next 9 frames to record an 11-9 win and take the magnificent Jason Owen Open trophy, a cool £5,000 payday and become the first title winner on the Supreme Pool Series roll of honour. 128 players entered the event which started on Friday morning. Comme the early hours of Monday morning, Gillespie was the last one standing.

The early stages of the competition produced significant drama and evidence of how tough this series is going to be with the much fancied Clint I'Anson and Mark Boyle both exiting the competition at the earliest avenue, as too did the reigning World Masters Champion Josh Kane.

It didn't take long for multi-discipline World Champion Darren Appleton to find his stroke back in the big time on the smaller table, although he was agonisingly denied a place in the final stages twice. The American Pool Hall of Fame member won four straight matches (including defeat of I'Anson) but lost out 11-10 to Shaw in the Winners Qualifying Round and then 8-7 to Tom Cousins in the Losers Qualifying Round.

​Raybone, Farnsworth, Shaw and the returning Carl Morris - another player with an individual World Championship to his name, all progressed to the Last 8 unscathed. However, all four lost to the quartet of players who emerged from the Losers Side, of which Cousins went the longest route.

Each leg of the Supreme Pool Series offers an additional bonus to the best performing 'Non-Elite' player. This time that particular accolade went to Stefan Risidi, who chalked up several impressive victories on his way to finishing a very credible joint ninth position and just two frames away from the final 8.​

​The second installment of the Supreme Pool Series will be the Strachan Cup which will run from the 13th-15th July.

For the full results of the 2018 Jason Owen Open, please visit Cuescore by copying and pasting the links below.