The 6th annual JOY World Chinese 8-Ball Masters is set to be the biggest yet with a record breaking $151,000 going to the eventual champion - the largest first prize in the history of the discipline.

Chinese 8-Ball continues to grow globally. Besides the obviously strong home contingent, 6 continents and a host and countries will be represented in Qinhuangdao. If you are not familiar with the rules and set-up, please visit the Home Leisure Direct Chinese 8-Ball Blog here to find out.

The main draw will feature 64 players. This consists of 24 players from China and the remaining 40 made up of international talent.

Getting a place in the 64 is tough - nearly half of that starting entry will have only secured their place during the last week. The China Regional Finals have just been completed in the venue (you can read our review of that here) whilst there are 8 places up for grabs in the ongoing International Qualifier that is taking place between 4th-6th January.

The rest of the line-up has been decided by other avenues such as national and international qualifying events and selection. The full list of players now confirmed is at the bottom of this article.

In the main draw, a Double Elimination format will be used all the way to the final, which will then be a one-off Championship Match.

Matches will increase in distance as the tournament progresses, but so too will the time limit for each match. Should the time expire before a target is achieved, whoever is leading at that point will win the tie.

If the scores are level, the players will contest a dramatic Black Ball Shoot-Out to determine a winner.

Gareth Potts is the reigning and defending World Masters Champion. In 2017 the Englishman claimed this title for a third time after a thrilling Shoot-Out victory against Chinese youngster Zhang Kunpeng.

Potts, who bagged the first two editions in 2013 and 2014 and is a four-time English 8-Ball Pool World Champion, trailed throughout almost all of that final. After an early defeat in the event he was forced to take the losers side of the draw too - in total he ran a gauntlet of 10 wins to lift the trophy.

At the JOY International Open in October, Potts almost secured a unique double, but was denied by home player Liu Yang in the final. As an example of how tough the qualification process for this year's event is, Liu did not make it through here.

Zhang will be looking to go one better and put behind any bitter memories of his final defeat; earlier in this season he tasted success at a tour event in Xining.

Elsewhere during the campaign, Zheng Yubo won back-to-back legs in Linyi and Lianyungang, whilst the effervescent Yang Fan claimed the top prize in Hangzhou.

Yang is arguably Potts' biggest rival in the sport. He is the only other winner of the JOY World Masters following his consecutive victories in 2015 and 2016. Yang also comes here as the current World Chinese Pool Champion having won the title in 2017.​​

There appears to be a real rivalry and power struggle between Potts and Yang; hopefully they will cross cues at some point within the coming days.

As too is Wu Zhenyu, who finished top of the 2017 JOY Cup Rankings. Because of this Wu was the only Chinese player to automatically make the main draw and was not required to take part in the recent China Qualifying.

One of the most exciting aspects of this tournament is that we see stars from other Cuesports backgrounds take part.

Names in American Pool don't really come much bigger than the USA's Shane Van Boening - a 5-Time US Open 9-Ball Champion. He is back in Qinhuangdao after a disappointing result last year.

​There are other players you may be familiar with on the list such as Italy's Fabio Petroni and Chile's Enrique Rojas.

As mentioned earlier, Potts, Boyes and Davies are all in the main draw, as too is Shaun Storry, who won the first of two qualifying tournaments held in the UK (Davies won the second). You can read about their wins here.

However, representation from the UK may not end there, as a number of players have made the long trip to Asia to take part in the International Qualifier (which is happening at the time of writing this article).

THE FULL LIST OF PLAYERS IN THE MAIN DRAW

Written and published by Michael Day on the 4th January 2018 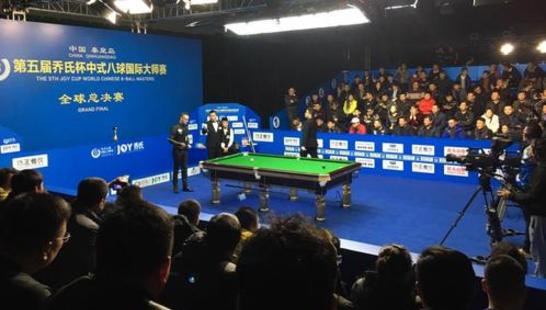