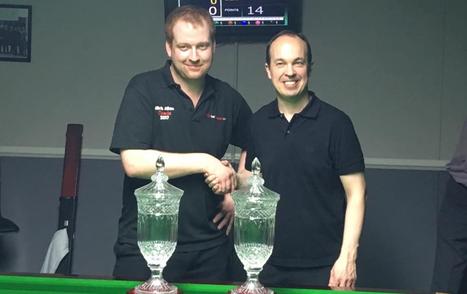 ​The second edition Mark Allen Classic; a very popular Pro-Am event raising funds for charity, will take place between the 25th-27th May at the 147 Snooker Club in Antrim.

Masters champion Allen was behind the exciting concept of bringing a world class Pro-Am competition to his home nation, whilst also having fun for a worthy cause. The 2018 version is set to be even bigger and better with a £3,500 top prize and a total of 80 entrants, which features a host of well-known professional figures.

Reigning champion Brown will be back to defend, he is one of the leading lights in the amateur contingent which also contains former professionals Patrick Wallace and Michael Judge. Amateurs will receive between 7 to 84 points per frame against their professional counterparts, depending on their ability.

The tournament has again kindly received support and sponsorship from McLean's Bookmakers and McDonalds.

The draw was completed on Facebook live last week – to see how the Preliminary and First Round draws panned out, please visit the Mark Allen Classic Pro-Am 2018 group on Facebook.

Congratulations to Mark and his team for getting this going – it is a great tournament on a number of levels!

Picture above is courtesy of the Mark Allen Classic