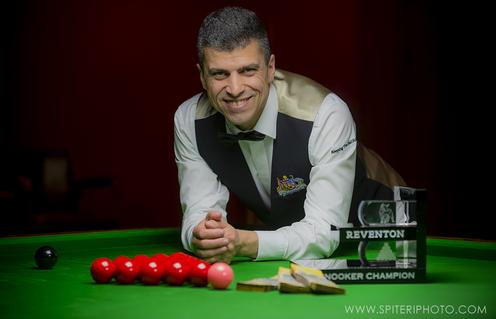 Steve Mifsud added yet another big title to his already bulging snooker résumé with victory at the lucrative Reventon Masters in Melbourne over the weekend.

The event was the third and final leg of the big money Reventon Triple Crown which is part of the 2018 Australian Billiards and Snooker Council's tournament calendar. Aaron Mahoney claimed the Reventon Classic in May, whilst Shaun Dalitz was victorious at the Pacific International in June.

​Access to the Reventon Masters was by invite only; the 12-player entry consisted of those who had qualified via the rankings list and two wildcards. The competitors were split into two round robin groups of six, with the top four from each making up the Quarter-Finals line-up.

​Mifsud, who earlier in the year won a record-equaling eighth Australian National Championship, only narrowly qualified for the Last 8 on frame difference with two wins out of five. However, come the knockouts, he produced the snooker he needed to.

He eliminated the previously undefeated Johl Younger 4-1 in the Quarters and then avenged a group game loss to Ben Foster by turning the tables in a 5-3 Semi-Final success.

​The former world amateur champion and main tour professional's opponent in the final was Kurt Dunham, who had been a member of the sport's top tier over the last two seasons. Dunham qualified as the undefeated Group B winner (including a victory against Mifsud) before seeing off Tyson Crinis and Mahoney.

​Mifsud would gain revenge again, though, securing the title, trophy and the $15,000 winner-takes-all kitty with a 6-2 final win.

Supporters of Australian Snooker since 2010, the Reventon Group and its supremo Chris Christofi have made substantial contributions to prize funds on the amateur scene Down Under.

​​​The picture above is coutesy of George Spiteri