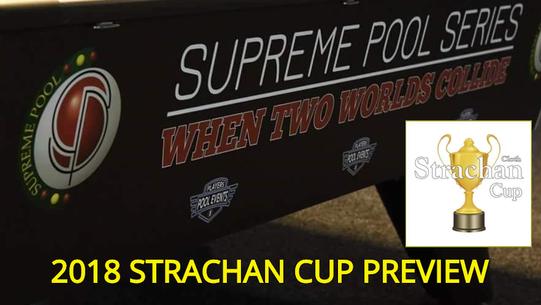 ​​The latest leg of the ground-breaking Supreme Pool Series starts this Friday with the three-day Strachan Cup.

Following on from Scott Gillespie's glory at the season opening Jason Owen Open in May, 128 of English 8 Ball Pool's top exponents from the UK and beyond will travel to the world renowned Players Pool and Snooker Lounge for a slice of history and a cool £5,000 winners purse.

As if the catalogue of immensely talented and successful entries was not enough, the ante has

been upped yet again with the introduction of Mick Hill - arguably the greatest player of all time in this discipline.

The Englishman, who is the pre-tournament favourite, recently secured a record-extending fifth WEPF World Championship title in Blackpool with an exciting final victory over another one of the Supreme Series' big hitters, Phil Harrison.

Hill begins his bid on the live streamed arena table Friday lunchtime with an intriguing clash against Mike King, a member of the English squad that defended the WEPF World Team Championship last month too.

Once again returning to their English 8 Ball roots are global Cuesports stars Darren Appleton, Chris Melling and Jayson Shaw. Despite their long term self-exoduses from the smaller table, the Mosconi Cup winning trio proved they are serious contenders with a number of fine results in Event 1. Shaw, in particular, impressed when reaching the Quarter-Finals.

In what is possibly the pick of the opening round fixtures, Melling crosses cues with Gillespie. One of these two signature names will immediately be pushed onto the interminable Losers Side where they would have to win eight straight matches to qualify for the straight Knock-Out Last 8.

Including Hill, the 2018 Strachan Cup can boast featuring all three current World Champions of the sport. IPA World Champion Ben Davies meets fellow Welshman Ben Fortey first up, whilst the ultra-consistent Liam Dunster of Scotland - runner-up to Gillespie in May and recent IPA Champions Cup winner, is due to open his account against big money match player Max Nosko.

The profile and riches of the inaugural Supreme Pool Series - which culminates in December's Home Leisure Direct Grand Finals where the winner will bank a record £51,000, has enticed players from outside of the UK to play.

Alongside strong representation from the Home Nations, players representing the Republic of Ireland, France, Morrocco, India and Malta will all be exhibited this weekend. Further evidence of the series' worldwide appeal is the entry of Jake McCartney, who will make the long journey from Australia to compete.

From start to finish, the whole of this weekend's must watch action will be covered live by Beard Productions, who will stream four tables simultaneously for each and every session.

To keep up to date with all the latest news and live stream information, please join the dedicated  Players Pool Events Facebook page here and visit the official website here.