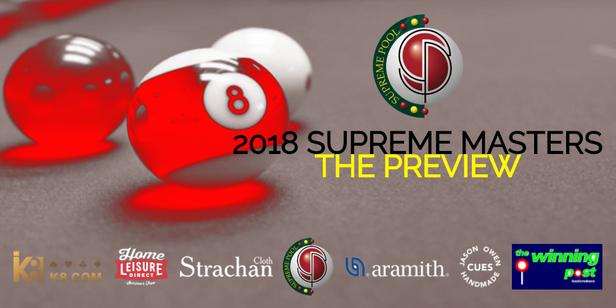 The latest installment of the inaugural Supreme Pool Series begins this Friday morning and it is the most significant yet with £13,000 going to the eventual champion - the biggest amount this year, so far, in the world of English 8 Ball Pool.

Following on from the Jason Owen Open and Strachan Cup competitions held in May and July respectively, the Supreme Masters marks the halfway point of the campaign which will culminate at the Home Leisure Direct Grand Finals in December where a record-breaking £51,000 is on offer to the last player standing.

Liam Dunster goes into this third event as the series' number 1 ranked player after back-to-back final finishes. With the Supreme Masters seeing the season debut of Blackball, his preferred ruleset, the current B.I. World Champion will surely fancy his chances. The ultra consistent Scotsman opens up his campaign against Matthew Schofield.

Last month's winner Phil Harrison begins his bid for a double by facing Darrell Whitworth, whilst event 1 champion Scott Gillespie will be looking to get back on track after a disappointing outing last time, although he has a very stern examination with fellow Scot Mark Boyle in one of the standout ties of the opening round.

Five times and reigning WEPF World Champion Mick Hill is the favourite with the bookmakers again. After looking formidable throughout at the Strachan Cup, Hill was denied by a clinical Harrison during the Semi-Finals in a match that saw him struggle to make a ball off his breaks. Mark Astbury has the unenviable task of tackling the English 8 Ball legend first up.

​It will be another Supreme Pool Series tournament that can boast participation from all three of the sport's reigning World Champions. IPA World Champion and professional number 1 Ben Davies will be involved in a blockbusting all-Welsh fixture with the in-form Jordan Shepherd, who recently won the IPA European Professional title under a fortnight ago.

Multiple time Mosconi Cup winners Darren Appleton, Karl Boyes and Chris Melling return to their smaller table roots; Melling is fresh from claiming the latest leg of the World Pool Series in Romania last week after defeating Jayson Shaw in the final. US Open 9 Ball Champion Shaw misses this event at the Players Pool and Snooker Lounge, but is scheduled to be back for the K8.com Classic in September.

Under a different structure, Rob Wharne won the 2017 Supreme Masters at the same venue. He returns as the defending champion, Michael Smout is his opening opponent.

128 players from across the UK and beyond will once again compete this weekend. In a slight tweak to the double elimination qualifying format, 16 players will now make the Knock-Out rounds where the tournament will be re-set; 8 will come from the Winners' Side and 8 from the Losers' Side.

The 2018 Supreme Masters will be covered live by Beard Productions who stream four tables simultaneously for each session.

To keep up to date with all the latest news and live stream information, please join the dedicated  Players Pool Events Facebook page here and visit the official website here.

​Article written and published on the 14th August 2018