The 2018 Supreme Pool Series is the brave new world that the players and fans of top tier English 8 Ball Pool have been calling for.

In short, it unleashes the world's best players from both sides of the great rules divide, who will come together and contest five mega events across 2018 at the renowned Players Pool and Snooker Lounge in Stoke-on-Trent.

A total prize fund of over £125,000 will be up for grabs in what is by far the most lucrative independent English 8 Ball series there has ever been. The winner of the Grand Final in December will bank a staggering £40,000, which completely dwarfs anything else the sport has to currently offer in monetary terms.

English 8 Ball icon and Players Pool Events entrepreneur Lee Kendall, along with his hard working team, are behind the series, which aims to put the players first and awaken the sleeping dragon profile of the sport.

Following on from a very successful and popular catalogue of amateur and invitational events over the last couple of years at the same venue, it was a natural progression for the Players Pool Events team to take.

It was a brave call, but undoubtedly the correct one. For far too long the planet's most prolific have been kept apart; this is where they will look each other in the eyes, play under the same roof and challenge for deserved, unparalleled prize funds.

The concept has received universal acclaim from the industry's premier brand names. Supreme Pool, Strachan, Aramith, Home Leisure Direct and Jason Owen Cues have all given their backing to this new era of the sport, which will hopefully benefit all.

Beard Productions, widely regarded as the flag bearer for live streaming in this environment, will be covering the whole series from preview to review, whilst the Winning Post will also be live at the venue and online to cater for all official betting activities.

So who has entered? The entry list is an embarrasment of riches with World Champions, major title winners, internationals and professionals past and present all predictably throwing their names into the gauntlet.

The temptation has also lured box office names Carl Morris and Chris Melling out of the shadows and back into the limelight of their spiritual homes - for Morris, it ends his 7 year self exodus from the sport.

Perhaps the most notable World Champion of all to feature, though, is arguably the greatest ever English 8 Ball Pool exponent; 'The Golden Boy' Gareth Potts.

A record breaking 4-time World Champion in this discipline, Potts' most recent World Title at the Lakeside in 2013 was the last time we saw him in top level competition on the small table.

Since then he has carved out a life changing career in the Far East with Chinese 8 Ball Pool, from which he has won the prestigious World Masters on three occasions. However, just like fellow trend setters Morris and Melling, the urge to be a part of this was too strong.

Craig Lakin, Shaun Storry, Rob Wharne and Greg Batten, the winners of the previous events to be held at Players throughout 2016 & 2017, have not shied away from the most testing of challenges either. They'll be back attempting to claim more silverware and money.

Players from all corners of the United Kingdom and Ireland are represented, with interest also coming from across the channel and overseas. The international outreach and appetite is for all to see.

The much anticipated action begins at the start of May with the season opening Jason Owen Open. Be sure to keep an eye on all the updates and features here at The Cue View.

Written and published by Michael Day on the 28th January 2018 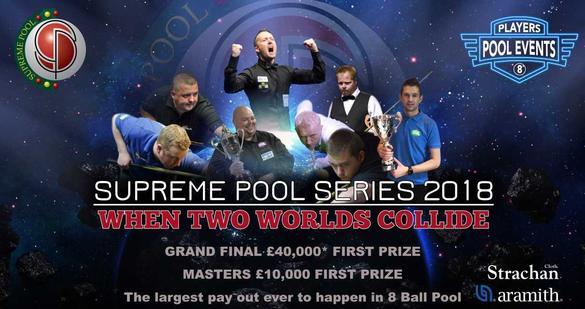