It was a momentous day for the sport as the inaugural World Snooker Federation Championship got underway in Malta; the most lucrative title outside of the professional game.

This mixed gender event, featuring 90 players from various national governing bodies, offers the Semi-Finalists a place at next month's Crucible qualifying, whilst the winner will bank 10,000 Euros and a guaranteed two-year tour card onto the multi-million pound professional circuit.

There were a number of strong performances from the pre-tournament favourites on Day 1. 18 year-old Luo Honghao from China is definitely a name to watch - he recorded a brace of victories to put himself in a very strong position to qualify from his Round Robin and into the latter Knock-Out phase. Luo made breaks of 127 and 91.

Fresh from claiming the Seniors Championship yesterday at the Dolmen Hotel, Brazilian Igor Figueiredo crafted the highest break of the day with a 131 during his pair of wins.

Iceland's Kristján Helgason - a former professional and Crucible qualifier, also racked up a century (130) in an ideal start which saw him not drop a frame in his two Best-of-5 fixtures.

​Of the female players who were in action today, there were no successes, although Rebecca Kenna (England) did force Thailand's Yuttapop Pakpoj to a deciding frame.

There is a very varied palette of talent on show ranging from up and coming youngsters from familiar and perhaps less familiar snookering nations, seasoned amateurs with major international honours to their CVs and former top tier names trying to get back their professional status. With so much at stake over the coming days (the final is Saturday morning), it will be very intriguing to see how things work out.

For all the latest tournament results, standings and fixtures, please visit the tournament homepage here.

Picture above is courtesy of Monique Limbos / World Snooker Federation 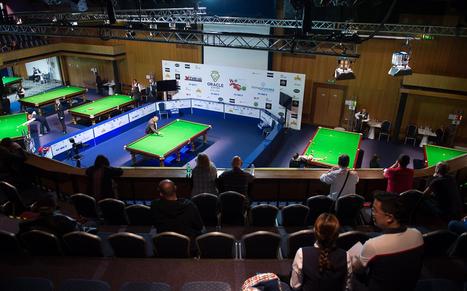