For the second consecutive year the Supreme Masters was settled by courtesy of a deciding frame as Karl Boyes came back and held his nerves to claim a maiden Supreme Pool Series title.

A plethora of English 8-Ball Pool's biggest names travelled to the Players Pool and Snooker Lounge in Newcastle-under-Lyme for the second event in this year's lucrative series that brings together exponents from all rule-sets within the sport. Homegrown stars from the UK and Ireland crossed cues with hopefuls from Malta, Morocco and even Australia; all of whom were in pursuit of a £5,000 payday.

'Box Office' Boyes is one of the series' star attractions; throughout his career, the Blackpool based cueist has collected several major accolades on the American Pool circuit including the World 8-Ball Championship and the Mosconi Cup. Before venturing onto the bigger baize, Boyes was a seasoned professional in the English 8-Ball ranks, but his victory on Sunday evening surely represents his most significant in the discipline.

Alongside his playing duties, Boyes is now a regular TV pundit/commentator for Matchroom MultiSport. With knowledge of how to put on a successful production, he certainly offered value for money across the weekend when going the long route towards the trophy.

Having lost to the returning Craig Lakin, 11-6, during his opening assignment, Boyes was immediately forced into the losers' section of the draw. However, just like Phil Harrison did on his way to the title in 2018, Boyes bounced back from the early setback, defeating Ben Flack, Karl O'Donoghue and Steve Petty to qualify for the last 16 knockouts.

Back on a level footing in the competition, Boyes had to quickly get himself out of trouble again when he turned around a 5-0 deficit to eliminate former world champion Craig Marsh, 11-7. He then booked a berth in the final following wins over England International Shane Thompson (11-6) and 2015 World Masters champion Craig Waddingham (11-5) during the quarter and semi-finals respectively. This was already new ground for Boyes on the Supreme Pool Series as his previous best outing was a quarter-final finish at last year's Grand Finals.

His opponent was fellow debut finalist and local native Jimmy Croxton, who had been the master of brinkmanship throughout the tournament, orchestrating a number of recoveries in his matches. Proceedings began comfortable enough for Croxton, though, with an 11-4 win against John Cairns, but subsequent deciding frame finishes with Flack and Dom Cooney tested his mettle and saw him qualify as one of the eight undefeated players.

​Further entertainment and drama ensued during his knockout affairs. After being paired with Cooney again in the last 16, Croxton repeated the final frame dose before denying Northern Ireland's Declan Brennan in the last eight via the same method again for his fourth successive deciding frame triumph. Brennan, last month's Liberty Games Open Event One victor, was looking to become the second player to win back-to-back Supreme Pool Series titles. In comparison to his previous outcomes, Croxton led from the start and allowed himself some breathing space during an 11-9 semi-final victory over current World Masters champion Callum Singleton.

​The opening two frames of the final were shared. Croxton moved 4-2 ahead before Boyes took the lead for the first time as he chalked up four frames on the spin.

​Further frames were traded, but despite struggling to find success off his own breaks, Croxton swung the pendulum back in his favour to turn a 5-7 deficit into a 10-8 advantage and find himself on the hill.

However, momentum would shift for the final time in the closing stages. Croxton found a ball off his break in the 19th frame but was unable to clear and watched his opponent respond to reduce the gap to one. Boyes then broke and dished in the 20th frame to take the tie all the way.

A more than familiar situation for Croxton given his exploits in the preceding rounds, he was left helpless when he potted off his break in the decider only to see the cue ball desperately being nudged into the top left hand pocket. With some precise shot making and positional play, Boyes capitalised as he swept the table for an enthralling and memorable win. He is the second Englishman, and fifth player overall, to have won a Supreme Pool Series title.

Elsewhere in the competition, defending champion Harrison started well with a high-profile success over Tom Cousins in the main arena, but he later lost to Clint I'anson in the winners' qualification round and then Australia's Jake McCartney in the losers qualification round. McCartney ended up as the best performing non-UK player after bowing out to Waddingham in the last eight. Reigning world champion and two-times a SPS event winner Scott Gillespie lost his opening two matches, as did fellow Scotsman Liam Dunster, the 2018 Grand Finals winner.

Event Three of the 2019 Supreme Pool Series takes place between the 19th-21st July. For further information on the series, please visit the official website here. 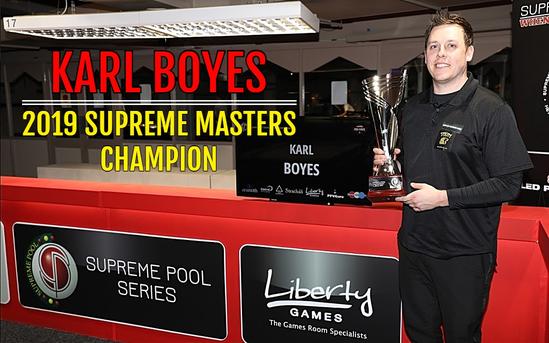