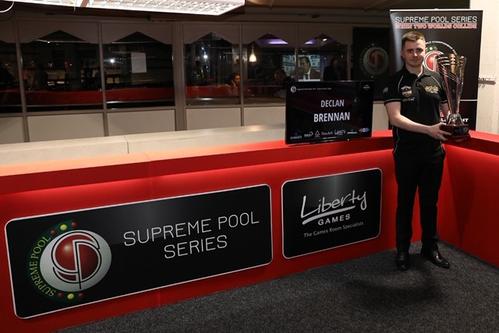 The curtain-raiser to this year's prestigious, big money five-event series saw players from across the UK, Europe, Africa and even Australia travel to the Players Pool and Snooker Lounge near Stoke-on-Trent for a shot at glory and a slice of the £19,000 total prize fund.

Northern Irishman Brennan has seen his stock steadily rise over the last twelve months off the back of solid performances and results on the tournament scene. Quoted at 20/1 before a ball was struck, the youngster has now elevated his game and profile to a new level with this potentially career-defining success.

Opening round victories over Tony Halpin (11-4) and Malta's Lydan Debono (11-5) put Brennan into the winners' qualification round, but experience overcame youth when fellow countryman and practice partner Ronan McCarthy pushed him to the losers' side after an 11-8 loss. No mistake was made with his second bite of the cherry, though, as he comfortably dispatched former two-time EEPF European Champion Ben Flack, 8-1, to qualify for the last 16 knockouts.

His opponent in the final was the evergreen Harrison - the pre-tournament favourite who was chasing his third SPS title following back-to-back triumphs at last year's Strachan Cup and Supreme Masters.

Despite a precarious gauntlet of Craig Marsh, Jordan Shepherd and Rob Wharne, the former WEPF World Champion emerged undefeated going into the knockouts. He narrowly got the better of Greg Batten (11-9) in the last 16 and then recovered from 7-1 down to deny McCarthy via a deciding frame in the quarters. Harrison then unleashed his force on Wharne once again during an 11-4 last 4 win.

Harrison went into the final as the fancied proposition, however, the tone of the match was possibly set in the opening frame when the Englishman failed to get desired position on the black that he subsequently missed. Unperturbed by the new territory, Brennan took the chance with both hands and continued to build throughout the first half of the tie as he established a 7-1 advantage.

Harrison chalked up the ninth frame, but there would be no repeat of his heroics from earlier on in the competition as Brennan kept him at arm's length during an 11-5 final result to claim the inaugural Liberty Games Open.

The biggest title he has captured so far, Brennan left with the trophy and a £5,000 payday. Following in the footsteps of Scott Gillespie, Harrison and Liam Dunster, he is just the fourth player to win a Supreme Pool Series event.

Mosconi Cup stars Chris Melling and Karl Boyes returned to their small table roots, where both had differing success. Melling failed to qualify, but Boyes made the last 16 before succumbing to another former WEPF World Champion on show in Chipperfield.

Event 2 of this year's Supreme Pool Series will take place between the 24th-26th May.

To learn more about the tournament sponsor, you can visit Liberty Games' website here.

For results, news, information and free streamed coverage of the Supreme Pool Series, you can visit the official website here.