​The Supreme Pool Series returns this coming Friday with the penultimate event of the 2019 campaign; the Central Vehicle Leasing Challenge.

In what has been an unpredictable and exciting season so far, the opening trio of tournaments have yielded three different winners and eleven different semi-finalists – evidence of how competitive this environment is.

Currently top of the rankings is the multi-talented Karl Boyes, who is arguably enjoying the best spell of his English 8-ball pool career to date. The Blackpool based star has balanced his time as a 9-ball analyst and player superbly, winning the Supreme Masters in May and very nearly doubling up when reaching the final of the following Strachan Cup in July. Boyes takes on Morocco’s Kamal Ben in the first round; one of several overseas players competing at the Players Pool and Snooker Lounge near Stoke-on-Trent this weekend.

Northern Ireland’s Declan Brennan made a big breakthrough at the start of the year after overcoming the legendary Phil Harrison in the final to claim the Liberty Games Open. Second in the SPS rankings, the youngster will be looking to re-secure top spot, but he has a tough opening test against recent WEPF World Championship finalist Dom Cooney.

Former world champion Adam Davis collected his maiden Supreme Pool Series title at the aforementioned Strachan Cup. The local native faces Sam Bircher during Friday evening’s late session. The evergreen Harrison, who so often start these competitions as one of, if not the favourite, begins his bid for an unprecedented third title on the SPS circuit against the dangerous Drew Hughes from Wales.​ 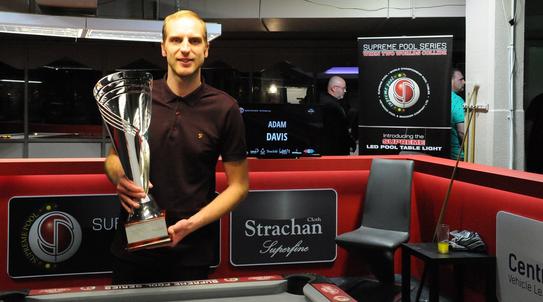 Since the series’ creation in 2018, the only other player with multiple triumphs to their name is Scott Gillespie. The current European and World Blackball Champion has been one of the sport’s most dominating forces in recent times; the Scottish behemoth will cross cues with Greg Batten in an irresistible round one affair.

Gillespie’s fellow countryman Liam Dunster has yet to reach the heights of last year’s success where he won the record-breaking Grand Final and ended the term as the number one ranked player. Keen to turn things around, ‘The Duster’ has received a bye, but he is guaranteed a swashbuckling clash in the second round as he awaits the winner of Clint I’Anson and Tom Cousins.

The initial phase of the event begins with double elimination qualifying. Come Sunday morning just 16 players will make up the knockout portion, all still in pursuit of the £5,000 top prize on offer.

As always, you can keep abreast of this weekend’s action courtesy of live stream coverage from Beard Productions, who will be filming four tables at the same time from each session.