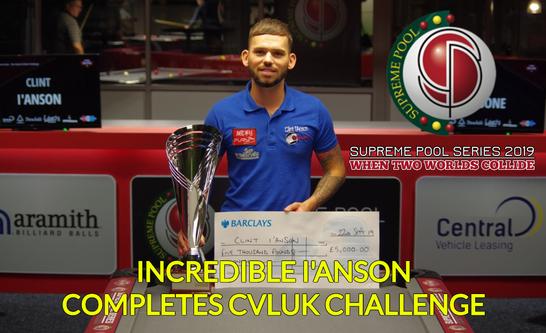 ​​Amidst a thrilling climax that went down to the very last ball of the tournament, Clint I'Anson became the fourth different winner on this season’s Supreme Pool Series when he claimed the lucrative Central Vehicle Leasing UK Challenge title last weekend.

One of English 8-Ball Pool’s most consistent performers over the last decade, I’Anson secured his maiden Supreme Pool Series trophy the hard way after immediately being pushed into the Loser's Side of the draw following an 11-7 loss to two-time WEPF World Champion Tom Cousins in the opening round.

‘Mowgli’ began his journey back to full health with an 8-5 victory over former IPA World Champion Jack Whelan; the two have previously won the IPA World Doubles Championship together as a pair in the past. Qualification into the straight knockout last 16 was assured for I'Anson off the back of triumphs over Mark Billingsley (8-4) and former world top 32 professional snooker player Jamie Burnett (8-5).

Now back on a level playing field, the Nottingham-based maestro showed his steel by coming back from 9-6 down to oust the reigning Premier League champion Mark Boyle in a deciding frame, 11-10. Steve Petty, who had knocked out previous event winner Adam Davis in a decider in the round before, was I'Anson's next victim in the quarter-finals, 11-7.

Both losing semi-finalists in July's aforementioned Strachan Cup, I'Anson ended the hopes of Shane Thompson during the same stage at the Players Pool and Snooker Lounge courtesy of an 11-5 result. Thompson continues to knock on the door at the Newcastle-under-Lyme venue; he also bagged a last eight finish at event two’s Supreme Masters.

I’Anson’s opponent in the championship decider was another one of the sport’s most prolific and successful stars, the current world number one professional ranked player, Neil Raybone.

A former World Masters champion, Raybone also emerged from the B section, although he had two bites of the cherry to make the single elimination phase. After losing to pre-tournament favourite Phil Harrison 11-4 in the Winner’s Qualification Round, his last 16 berth was booked when overcoming ex-European Champion Oly Bale, 8-5. Subsequent knockout round wins over Chris Melling (11-5), Darren McVicar (11-10) and 2017 IPA World Champion Craig Marsh (11-8) left Raybone just one further hurdle away from the CVLUK crown.

Both featuring in their debut SPS event final, it was I’Anson who started the stronger; an initial 2-0 lead later swelled into a commanding 6-1 advantage. However, gritty Raybone managed to haul himself back into contention, and despite further deficits of 4-8, 6-9 and 8-10, he forced a pulsating twenty-first and final frame.

It looked like fate for Raybone as he watched I'Anson's impressive break in the decider turn sour as the cueball got kicked in-off. A relatively favourable layout was presented for Raybone, but after a few positional shots in the clearance went slightly awry, he was left with a tricky double on the black that went north of the middle pocket.

Besides the pressure and tension around the arena, there were few obstacles in the way for I'Anson on the table as he coolly cleared up for the glory and a £5,000 payday.

The fifth and final event of this year’s gripping Supreme Pool Series is the Grand Final that takes place between the 6th-8th December. Once again due to showcase many of the world’s leading exponents from both sides of the rules divide, the event boasts an increased prize pot.

Written and published by Michael Day on the 24th September 2019