5 TIMES RONNIE SMASHED UP A FINAL...​

It has been a very eventful and successful few weeks for Ronnie O'Sullivan. Another Champion of Champions Final, breaking the 900 career centuries mark and Major Ranking Title Numbers 29 & 30 at the English Open and Shanghai Masters respectively.

Those victories were highlighted by extraordinary performances in both finals which saw O'Sullivan win by very comfortable margins of seven frames; 9-2 v Kyren Wilson in Barnsley and 10-3 v Judd Trump in China.

You probably won't be surprised to learn that these aren't the only occasions 'The Rocket' has stream-rolled an opponent in a major final. We take a look at other times throughout his career when he coasted to the trophy...

Shanghai is a city that O'Sullivan has very fond memories of. As well as two Shanghai Masters titles (2009 & 2017), he also won the first ever China Open which was staged there in 1999.

On route to the final he didn't face a member of the World's Top 16, although he came through a 6-5 deciding frame win against Brian Morgan in the Last 4.

Stephen Lee was at the time a ranking event winner and represented a step up in class for Ronnie that week. However a brace of centuries helped him to a comprehensive scoreline.

Mark Williams has been one of O'Sullivan's fiercest rivals throughout his career, which is now more than a quarter of century young.

To make the final in Aberdeen Ronnie had to come back from 4-0 down to Graeme Dott in the Semis; eventually recovering to win 6-5.

Despite destroying the soon-to-be World Champion 9-1 in the final, O'Sullivan registered a high break of just 69 in the match.

Later that year, after Williams' Crucible triumph, he also put the Welshman away 9-3 to defend the China Open (although in a different location of Shenzen)

2001 would be a very special year for ROS as he finally won the World Championship. He also made it a hat-trick of UK titles with a 10-1 smashing of Ken Doherty in front of the BBC cameras.

His bid nearly came undone in the Quarter-Finals, though, when he had to win the last four frames against Peter Ebdon to advance 9-8.

Given Doherty's pedigree and well known tenaciousness, it had the makings of a competitive final, and indeed the opening two frames were squared. However, that's as good as it got for the Irishman as O'Sullivan won nine in a row for a huge difference.

From Ronnie's third UK title to his fourth.

​In the Semi-Finals he famously made a 147 maximum break in the deciding frame of his encounter with Mark Selby.

Scotland's Maguire was his opponent in the final, a former winner of this title himself. Yet the final was a precession for O'Sullivan who even threatened a clean sweep when he went 8-0 up. On the resumption in the evening Maguire avoided that embarrassment, but still lost very heavily.

Another Triple Crown event final, another opponent denied a dream in a nightmare fashion.

Barry Hawkins showed resilience, spirit and class when losing to Ronnie in a keenly competitive 2013 World Championship final. After victory over a red-hot Judd Trump in the Semi-Finals, he was appearing in his first Masters final.

O'Sullivan was making his big stage return after a 8 month break away from the sport. He came back in typical style eliminating Williams, Selby and then reigning World Champion Stuart Bingham on route.

At the time chasing a record-equalling sixth Masters trophy, he witnessed Hawkins win the opening frame. However, he then went on a trademark burst of frames - this time 10 on the spin.

Some of Ronnie's most brutal final displays were in the Premier League, a tournament he won 10 times.

In many ways the event was tailor-made for O'Sullivan; a one table set-up in front of big audiences and in later years with a stop clock in operation.

​In 2005 (when the competition was held in the Spring and Winter) he destroyed Mark Williams and Stephen Hendry respectively 6-0 in both finals. His streak continued in the final of the 2006 edition when he left Jimmy White frameless in a 7-0 result.

The picture above is courtesy of Monique Limbos

Written and published by Michael Day on the 21st November 2017 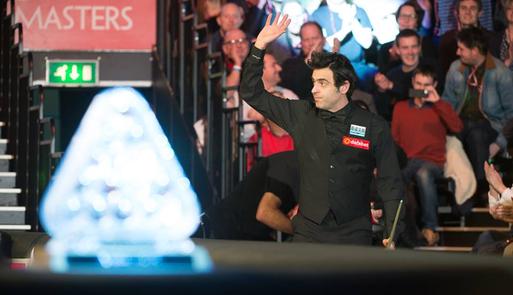