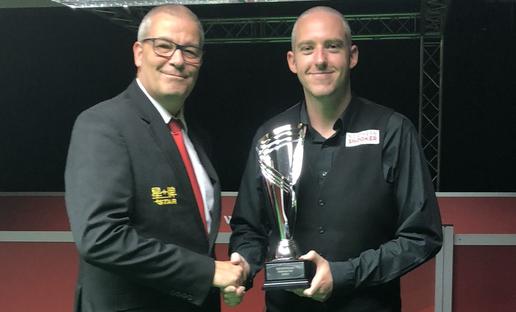 A CHALLENGE COMPLETED FOR GRACE

Former UK Semi-Finalist Grace was relegated from the professional circuit in April and was unable to bounce back immediately through the subsequent Q-School. However, he has applied himself well on this new secondary tier of the sport and is in a good early position to claim one of the two pro tour cards on offer at the end of the ten event Challenge Tour campaign.

Grace began the two-day tournament with victories over fellow ex-professionals Jamie O'Neill (3-2) and then Simon Bedford (3-0).

​Returning for 'Finals Day' he defeated Phil O'Kane (3-1) before facing a further three names who have possessed professional status in James Cahill (3-0), Steven Hallworth (3-2) and then Mitchell Mann 3-0 in the final.

​The £2,000 that Grace pockets will go alongside the £700 he earned for reaching the Last 4 during Event 1 in Burton last month. This puts him joint top of the Order of Merit Rankings with Event 1 champion Brandon Sargeant, who lost to Mann 3-2 in the other Semi-Final on Wednesday - a reverse scoreline of their meeting at the same stage in Burton.

​Luke Simmonds, runner-up to Sargeant just under six weeks, reached the Quarter-Finals where he was eliminated 3-0 by the same player.

11 times World Women's Champion Reanne Evans ousted Matt Couch (another ex-professional) 3-2 in the opening round but then lost via a decider to Hallworth in the Last 32.

​The third installment of the Challenge Tour is scheduled to take place parallel with the Riga Masters in Latvia at the end of this month.