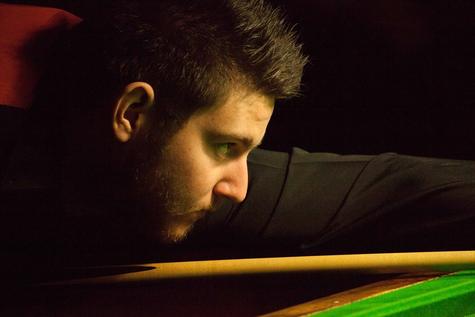 Kurt Dunham (pictured above) ended his season in style by capturing the Australian National 6 Reds title for the first time.

​Dunham went the entire long weekend unbeaten; qualifying top of Group A after winning all his matches 3-0!

In the Quarter-Finals he continued his unblemished record with a 4-0 clean sweep of Garry Elliot, but had to recover from a 3-1 deficit when overhauling Les Higgins 5-3 in the Last 4.

​In the final he faced the fellow undefeated Cale Barrett. A former winner of this event in the past, Barrett had earlier constructed a maximum 75 break during the round robin phase.

Dunham controlled the initial proceedings, taking a 4-1 lead. Barrett rallied to chalk up 3 of the next 4 frames, but the eventual victor sealed it in the 10th.

Coverage of the final on YouTube can be found here.

Back in March, Kurt claimed his maiden Oceania Championship, a title which rewarded him with a two year guaranteed professional tour card with World Snooker starting later this month. He travels to England next week, and aims to be part of the circuit full time.

For more information, and the full results to this tournament, please visit the Australian Billiards and Snooker Council's (ABSC) website here.

Rodney Cuillèrier added his name to a winners list that includes famous stars such as Thorburn, Stevens, Wych, Bear, Chaperon, Robidoux and Pagulayan when he lifted the Canadian National Snooker trophy this past weekend in his home province.

30 players started out the championship; Cuillèrier advancing top of his group after winning all three of his best of 7 fixtures.

In the knockout section he comfortably dispatched Andre Roy 5-1, Mehdi Dorhmi 5-1 and Gilles Boisemenu 6-2 to reach his maiden final in this competition.

It was in fact the 7th time in the last 10 years that Zeigler had appeared in the final. In the Quarter-Finals here he gained some measure of revenge for his final loss 12 months earlier by dethroning reigning champion John White 5-1.

Floyd also had the highest break of the event with a 94.

Run to a Double Elimination format, Loyer went unscathed throughout, getting the better of MacLeod 3-1 in the Hot Seat match, and then 4-1 in the Grand Final.

To find out more information, and the full results, please visit the Canadian Billiards and Snooker Association's (CBSA) website here.

Written and published by Michael Day on the 6th May 2016