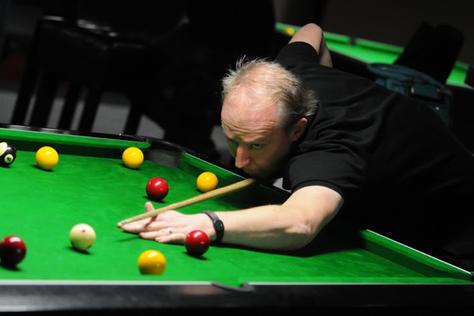 BACK TO BACK 147s FOR GARETH HIBBOTT

If you've ever picked up a snooker cue, you may have dreamed about making a maximum 147 break. Most will get nowhere near to doing this, though.

We see 147s being made regularly on the professional circuit these days - this season there have been five registered so far. No doubt the top tier stars compile them in practice too, but how often do you hear about the perfect frame being achieved consecutively?

That is exactly what part-time amateur snooker player Gareth Hibbott amazingly did on Tuesday night during a practice session against teammate John Roberts at the Fleetwood Hesketh Club​.

Multi-talented Hibbott is generally better known for his supreme skill on a pool table. In 2016 he became the IPA World Professional Blackball Champion and only a year later he claimed the Seniors version too. Elsewhere, the popular 49-year-old has a plethora of other major titles and accolades.

The versatile cueist has recently been practicing hard on the smaller table for a busy end to the English 8-Ball year; a schedule that includes the record-breaking Home Leisure Direct Grand Final which takes place in a few weeks time. However, he briefly took some time out to play on the larger baize and released a life long ambition...and then some!

Hibbott had constructed 147s whilst practicing individually in the past, but this was the first, and immediately second time, he had ever experienced the zenith of break breaking against an opponent.

Does anyone else have a story about a player knocking in back-to-back maxis, whether that be from a professional or amateur? It has not been done in top level competition before, but I do remember ex-professional Adrian Gunnell reportedly having done three in the space of four frames.​