Jonathan Bagley is the first of eight international qualifiers who will line up alongside the invited legends at the 2018 World Seniors Snooker Championship in Scunthorpe come March.

Next year's World Seniors is the blue-ribbon event in the newly formed World Seniors Tour that also boasts the UK Championship, Masters and Irish Masters.

The Snooker Legends team have built on the success of their inaugural hosting last season by expanding the starting entry from 12 to 16 at the Baths Hall.  As well as England, qualifying events are set to be held in Scotland, the Republic of Ireland, Wales and even China; the opportunity to share the limelight with players such as Stephen Hendry is starting to go global. ​

There was a competitive entry of 31 who began the weekend in Newbury. The tournament featured a number of players with top tier and international amateur experience.

Bagley, who lives in Leeds, advanced to Sunday's Last 8 after 3-0 victories over Neil Herd and Stuart Watson. In the Quarter-Finals he got the better of Jersey's Aaron Canavan 3-1 and then booked a spot in the final with a 3-2 win on a Black Ball Tie-Breaker against the consistent Aidan Owens.

Jonathan's opponent in the final was Matt Ford, who had ended the hopes of Barry Pinches 3-1 in the Semi-Finals. Pinches, a former professional of 26 years and a PTC event winner, began that match with a 133 total clearance - the highest of the weekend.

Just so often as it is with this relatively short format, the final was dramatic. Bagley started by pinching the first frame despite requiring three snookers. However, Ford was unperturbed as he levelled up at the end of the next and then cleared up the colours in Frame 3 having been 26 points down to go 2-1 up.

The match wasn't denied a thrilling climax, though. After squaring it up at 2-2 and then a five minute sequence on the all or nothing Black Ball Tie Breaker, Bagley sunk it in a baulk pocket to seal victory, although his heart may have skipped a beat as the cue ball bounced off the jaws of the opposite middle pocket in the process.

Bagley continues to have success within these innovative Snooker Legends competitions. He was a qualifier for the last World Seniors Championship and at the venue defeated Tony Knowles and Cliff Thorburn before going down to John Parrott in the Semi-Finals. He has also qualified for the main draw of the UK Seniors Championship in Redhill later this month.

The 2018 Snooker Legends World Seniors Championship will see the champion receive £10,000 and a spot in the World Championship Qualifiers at Ponds Forge.

The above picture is courtesy of Jason Francis.

Written and published by Michael Day on the 15th October 2017 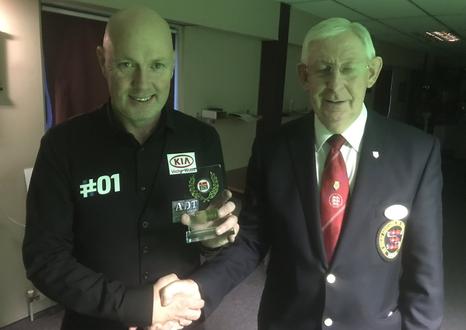