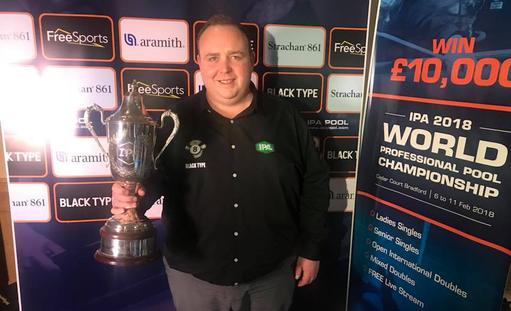 For the second time in three years, the IPA World Blackball Championship was won via a thrilling deciding frame in a deciding set, as Ben Davies held his nerve to claim the title for the first time.

​As a seeded professional, Davies entered the competition at the Last 64 stage where he negotiated qualifier Nicky Ellar 3-0. More testing outcomes would await him in the following rounds.

​Against Scotland's Ross Fernie in the Last 32 the Welshman had to recover from 2-1 down to record a 3-2 success, whilst former main tour snooker player Ryan Clark (England) also took him to a fifth set in the Last 16.

Davies' biggest recovery of the week was his 3-2 win over Kristian Phillips (Wales) in the Quarter- Finals where he lost the opening two sets and was one frame away from an exit in the third.

On 'Finals Day' he got the better of Jon McAllister 3-0 to book his place in the final, although two of those sets went the distance, 4-3.

​His opponent there would be friend and fellow countryman Simon Ward, who himself had an eventful route through to the championship end game.

Ward led three times in sets during the showpiece - 1-0, 2-1 and 3-2, but his opponent forced a seventh and final set. Due to the close proximity of both players throughout, it felt right when the pair moved the set score onto 3-3, meaning one solitary frame would decide it all.

Despite potting off the break, the balls were not ideal for Ward and the opportunity of a tricky clearance was passed. However, with problems to solve during his own clearance, Davies went for game and was eventually rewarded after gently developing the tied up black. Still slightly hampered, he coolly slotted home the 8-Ball into the top left pocket for a visibly emotional victory.

After a self-exodus from the sport not so long ago, Davies will feel more than justified making a full-time return. He adds another World Title to his CV and pockets £10,000. He is the fifth different winner of the IPA World Blackball Championship in five years.

Having also started his campaign in the Last 64, Ward drew the toughest qualifier possible first up - Scotland's Mark Boyle, who despite being classed as an amateur, was the ante-post outright second favourite for the title due to his memorable debut season on tour. In a deciding set and frame outcome, Ward advanced.

Whilst Ward will be hurting over the dramatic climax to proceedings, he can take solace in the fact the last person to experience final frame heartbreak in an IPA World Final was Craig Marsh in 2016 - 12 months later he returned to lift the trophy.

Elsewhere in the event, defending champion Marsh lost in the Last 16 to Phillips. Previous champions Jack Whelan (2015) and Gareth Hibbott (2016) both fell at the first hurdle in the Last 64 to Brian Halcrow and Clark respectively.

Image above is courtesy of the IPA.

Written and published by Michael Day on the 11th February 2018