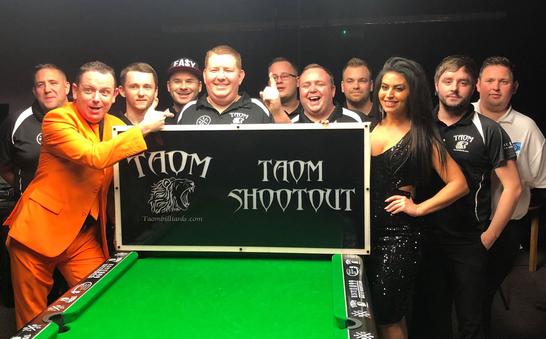 ​Jordan Shepherd put on a swashbuckling display of Blackball Pool as he won the inaugural Taom Shootout at the Players Lounge in Atherton last night.

The fast paced eight man invitational event was being showcased by promoters STRN who promised to bring an added emphasis on excitement, entertainment and crowd participation. They delivered on their promises.

Completed across just one action packed evening with a shotclock in operation and no time extensions, players had to think and act quickly in front of a raucous audience who enjoyed what they were watching.

Shepherd kicked off the evening by dispatching Craig Lakin 5-3; having seen his rival win two in a row to level up at 3-3, he claimed the last two to seal progression.

Despite losing the opening brace of frames in his Semi-Final against reigning BI World Champion Liam Dunster, Shepherd rattled off five of the next six (5-3) to book his place in the final.

The Welshman's opponent there was Simon Fitzsimmons. Runner-up in the 2017 IPA World Championship final, Englishman Fitzsimmons began his campaign by seeing off current IPA World Champion Ben Davies 5-3. Then there was a dramatic climax in his Last 4 clash with Seb Web where he swerved out of a snooker to pot the decisive 8-Ball to record another 5-3 victory.

In an engrossing final, Shepherd secured the title when he deposited a trio of successive frames from 3-2 down to once again win 5-3.