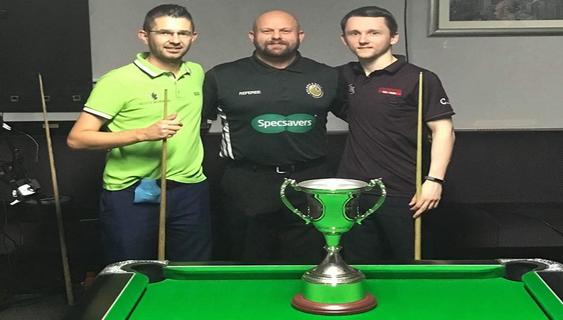 It may have been the English Open, but it was an all-Scottish affair in the final at Murphys Sports Bar, Doncaster, as Mark Boyle defeated compatriot Liam Dunster to claim the title.

A high quality entry of 64 players featured across the action packed and intriguing weekend, initially playing in a double elimination format until eight qualifiers were confirmed for the Knock-Outs from the Quarter-Finals onwards.

One of the most consistent players on the worldwide Blackball Pool scene, Boyle began his campaign with wins against Reggie Gill (11-6) and Geoff Allen (11-7) before facing Dunster for the first time during the event, a meeting he came through 11-6.

Boyle was pushed over to the Losers' Side when he lost to current IPA World Champion Ben Davies 11-7, but he bounced back assuring qualification when he got the better of former two time back-to-back WEPF World Champion Tom Cousins, 8-5.

In the Last 8 former professional snooker player Boyle dispatched 2015 IPA World Champion Jack Whelan, 11-5. In the Semis he ousted fellow countryman and Event 1 winner on this year's Supreme Pool Series Scott Gillespie, 11-9. Gillespie had caused a sensation in the Quarters when he swept aside Davies by the remarkable score of 11-0.

His passage in the KOs saw him deny Matthew Lawrenson (11-6) and then yet another former IPA World Champion in the form of Gareth Hibbott (11-8).

However, despite Dunster starting well in the final with two clearances to take a 2-0 lead, Boyle gained momentum, establishing a comfortable lead which he converted into an 11-7 victory.

Boyle was a last minute entry into the event - he'll certainly be glad he made the trip south, going home with the title, trophy and £5,000 in prize money.