Several professionals traveled to Romania to compete in the Golden Q Cup which was won by Belgium's Luca Brecel.

Held at the Golden Q Club in Baia Mare, top tier stars joined amateur hopefuls across four days of action. There was a cosmopolitan palette of entries with 11 different countries represented.

Players were split into eight groups of four with the top two qualifying for the Knock-Outs. All six professionals who featured topped their pools, although Michael Georgiou did lose 2-1 to 11-year-old Bulcsú Révész from Hungary, who potted a long re-spotted black for the match.

​In the Last 16 Mark Davis, Ashley Hugill, Tom Ford, Brecel and Georgiou all advanced again, but Lukas Kleckers was the first professional to be eliminated when he was denied by Bulgarian amateur Bratislav Krastev 3-0.

The final, which was reffed by World Snooker referee and Romania's own Alex Crisan, would see Brecel and Georgiou cross cues. Brecel won the match 5-1, during which he made the tournament's highest break of 139. It meant the World Number 15 dropped just two frames on route to the title. 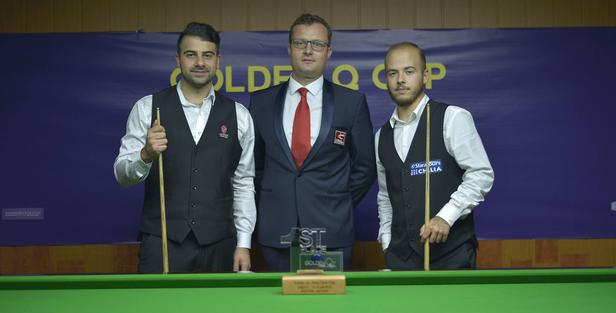