Carlo Biado defeated Roland Garcia 13-5 in an all-Philippines final to claim the 2017 WPA World 9-Ball Pool Championship. It is the first time he has won this event and he follows in the footsteps of fellow countrymen Efren Reyes (1999), Ronato Alcano (2006) and Francisco Bustamante (2010).

Thursday's Finals Day in Doha, Qatar brought an end to 10 days of qualifying and main draw action. After the initial qualifying opportunities were taken, the 128 player main draw was split into 16 groups of 8. From there it was Double Elimination with competitors needing to win 2 out of 3 matches to progress into the Last 64 Knock-Out section.

There was then a very rare occurrance and outcome in his Quarter-Final match with China's Liu Haitao. Played on the same day after the Last 16 matches, Liu went back to his hotel to get some rest. However, he apparently overslept, and by the time he arrived at the venue he was 25 minutes late for his match. As per the tournament rules, players who are not present within 15 minutes will forfeit the match - in this case 11-0.

​The Semis and Final were both played on Thursday. Biado ended the hopes of Chinese Taipei's Lin Wu Kun 11-6 to set up a decider with Garcia - both players making their first ever World 9-Ball Championship final appearance.

​Garcia booked his berth courtesy of an 11-6 success over 18 year old Albanian sensation Eklent KaÇi in the Last 4. KaÇi won twice on the World Pool Series this year and finished top of the rankings.

Elsewhere on route, Garcia came through the One-Loss side of the Double Elimination and then denied 2014 champion Niels Feijen (Netherlands) 11-7 in the Last 32 and 2015 champion Ko Pin Yi (Chinese Taipei) 11-8 in the Last 16.

Biado began the final flawlessly producing virtually faultless pool in racing to a commanding 7-0 lead. Garcia managed to get a slight foothold into the match, but the damage was probably already done (especially in the alternate break format) and Biado finished the job to bank the $40,000 winner's cheque.

It has been a golden year for Biado who also claimed Gold Medals at the World Games in Poland and the SEA Games in Malaysia. He too reached the final of the Aramith Masters in New York (part of the World Pool Series).

Albin Ouschan (Austria) went to Doha as the defending champion but was dethroned in the Last 16 by Lin, 11-3.

​Recent Mosconi Cup MVP Joshua Filler (Germany) looked as if he could create an incredible double, but his hopes were gone in the Last 16 after losing to Maung Maung (Myanmar) 11-6 in the Last 16 too.

It was annouced before the final that the WPA have agreed a new 4 year contract with Qatar to continue hosting the Championship. Table and equipment manufacturer Wiraka will again be the official and exclusive table supplier for the event.

Image above is from Dariusz Goral's YouTube live stream

Written and published by Michael Day on the 14th December 2017​ 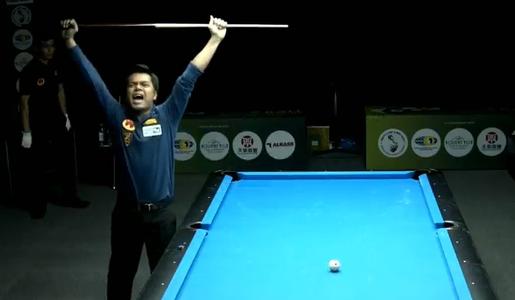