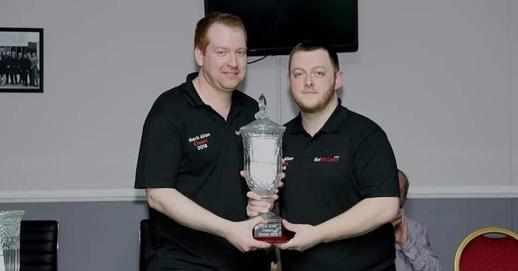 Jordan Brown capped off a memorable week in his snooker career by winning the 2018 Mark Allen Classic Pro-Am at his home club in Antrim, Northern Ireland on Sunday evening.

Fresh from re-qualifying for the professional circuit via Q-School in Burton on Friday afternoon, Brown quickly made the trip back across the water to retain the title he won last year during its inaugural staging.

The unique 80 player event held at the 147 Snooker Club was supported by several high profile professionals who mixed it with amateur talent from across Ireland throughout the three days with a handicapping system in place.

This year the tournament was in aid of the Headway Charity, who help improve the lives of people living with brain injuries. Once again generous sponsors came forward to lend their backing for a great cause and in total over £10,000 was raised for the charity in what was an enjoyable long weekend for all.

There he faced friend and practice partner Mark Allen himself, the main creator and organiser of the competition. Allen eliminated fellow professional opposition in Rod Lawler (Last 16), Jimmy Robertson (Quarter-Finals) and Ricky Walden (Semi-Finals) on route.

However, in front of an enthusiastic audience, it was Brown who emerged the champion again with a narrow 5-4 victory. Brown won the winners' kitty of £5,000, although both he and Allen (as well as many other players) donated portions of their prize money to the Headway Charity.

Elsewhere in the tournament last year's Runner-Up Fergal O'Brien lost his opening match to amateur Stephen Ferguson, whilst Allen's 13-year-old stepson Robbie McGuigan - who compiled a maximum 147 break in practice only a few weeks ago, took Higgins to a deciding frame.

Talking of 147 breaks, there were two exhibitions of perfection in the tournament on the Saturday with Allen achieving the feat and then later in the day Jimmy Robertson too.

The best performing amateurs this year were Gareth Kirwan and Mervyn Campbell, who both reached the Last 8. 68-year-old Campbell, who is a local player at the club, had ended the hopes of both Tom Ford and Peter Lines earlier in the proceedings. ​

The picture above is courtesy of Peter McMeekin.