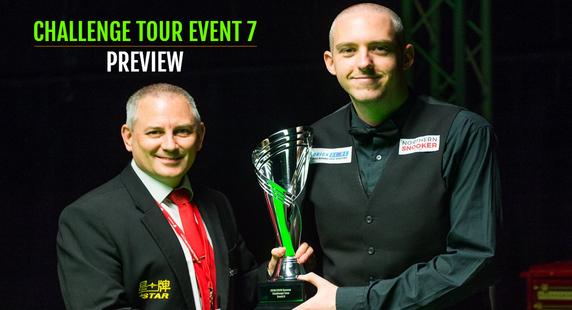 After last week's stop in Belgium, it is a quick turnaround for the Challenge Tour as Event 7 of 10 takes place this weekend at the Barnsley Metrodome.

David Grace's victory in Lommel moved him to the top of the CT rankings list with £5,525; he is the only player on the tour so far to have won multiple events following success in Event 2 during the summer.

After all ten events have been completed, the top two will earn promotion onto the professional circuit for at least the next two seasons. Mitchell Mann, who like Grace was relegated from the top tier only last season, occupies second place with £5,200. Brandon Sargeant is not far behind in third with £4,725.

There is a gap between the top trio and the chasing pack which is spearheaded by fourth placed Barry Pinches (£2,750). With a possible £8,000 still available for each player, this deficit is in no way unrepairable.

After just 40 players entered in Belgium, it is good to see that 61 are set to participate in Barnsley, although still 11 short of what full capacity in each event should have been.

This works out that three lucky players have received a bye into the Last 32, which means they are already guaranteed prize money. Among these three includes Mann, who will play the winner of Sydney Wilson v Saqib Nasir.

In Round 1, tour leader Grace faces Austrian Andreas Ploner with the winner of that playing either recent UK Seniors qualifier Leo Fernandez or Brandon Hall in the Last 32.

The bottom half of the draw appears tougher than the top. Along with the before mention Grace and Mann, are Pinches (plays maximum making teenager Sean Maddocks), fifth placed Steven Hallworth (plays Ukrainian youngster Iulian Boiko) and sixth placed David Lilley (plays a semi-finalist from last week, Peter Devlin)

Sargeant is in the top half; the Event 1 winner will cross cues with Hungarian Zsolt Fenyvesi, first up at the Metrodome, which is currently hosting International Championship qualifiers for the professional tour.

Elsewhere in this half seventh placed Ben Hancorn, runner-up to Grace in Lommel, will meet Jackson Page in one of the ties of the opening round. Eighth placed Daniel Womersley, who also reached the Last 4 last week, meets former Crucible qualifier Simon Bedford.

​You can keep up to date with all the results this weekend via snooker.org