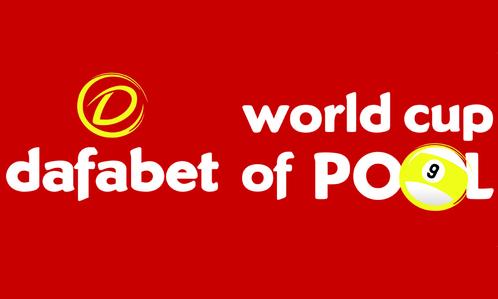 ​​DAFABET are the title sponsors of the 2015 World Cup of Pool which takes place from 22nd to 27th September at the York Hall, London. Following on from successful sponsorships in snooker and boxing, the Asian-based company now lend their name to one of the biggest events on the pool calendar.

Featuring 32 two-man teams from around the world, the Dafabet World Cup of Pool is celebrating its tenth year as defending champions England attempt to become the first team ever to successfully defend the title.

Broadcast for six days live on Sky Sports in the UK, the tournament is also live on ESPN3 in the USA, ESPN Latin America as well Sky in New Zealand, CCTV (China), Nova TV in the Czech Rep & Slovakia, Viasat (Scandinavia & Bulgaria), Fox in Greece, Turkey, Israel, Cyprus and Malta and finally OSN/Showtime across the Middle East.

In addition the Dafabet World Cup of Pool is syndicated around the world as 31 x 1 hour programmes by Matchroom Television.

Commented John Cruces, Head of Marketing Operations at Dafabet; “We’re very pleased to be title sponsors of the 10th World Cup of Pool on its return to London. With our head office being based in the Philippines we know the sport very well and wish all the players the best of luck as the action unwinds at the famous York Hall.

“With Dafabet’s key markets being Asia and the UK, this partnership allows us to connect with pool followers on an international basis to give Dafabet increased exposure across a global platform.”

Barry Hearn, Chairman of Matchroom Sport said, “We’re delighted to have Dafabet on board for one of pool’s majors. We have worked successfully with them in the past and are really looking forward to forging a strong partnership through the Dafabet World Cup of Pool.

“With the event taking place in London and with England as defending champions, the scene is set for what could be the best World Cup of Pool yet!” he added.

Since its foundation in 2004, Dafabet has rapidly grown its market share to become one of the leading global betting brands. They’re currently main club sponsors of Sunderland AFC & Blackburn Rovers FC and have international gaming partnerships with Everton FC and Celtic FC. They have also been title sponsors of the Masters Snooker tournament for the last two years.

The company offers sports betting on a number of sports from the Barclays Premier League, Champions League, FA Cup, Europa League, La Liga and Bundesliga to other sports including the NBA, major tennis tournaments, snooker, Formula One and horse racing amongst others.

thecueview would like to thank Luke Riches of Matchroom Sport for writing, and providing us with this article from the 26th August 2015.