​Aaron Davies advanced to phase two of the Vinny.co.uk Champions League Pool after topping Group B on Monday evening at the Players Pool and Snooker Lounge.

Davies – runner-up in the IPA World Championship earlier this year – won all three of his fixtures in front of the live FreeSports cameras to join week one victor Josh Kane in the last eight of a competition that carries a £10,000 first prize.

The evening in Newcastle-under-Lyme began with a 3-3 draw between local cueist Andy Cragg and former European Champion Oly Bale. Davies then recovered from going behind early on to defeat former BAPTO Champion John Sullivan 4-2. ‘The Soulman’ immediately bounced back, though, getting the better of Bale 4-1 to keep his ambition alive.

Manchester cueist Davies maintained his 100% record with a comfortable 4-1 triumph over Cragg to leave himself pretty going into the final round of matches, with Sullivan being the only player that could deny him top spot.

Sullivan did indeed do his bit in prolonging the outcome - chalking up a 4-2 win over Cragg - but he was reliant on Bale defeating Davies in the last rubber to take it to the tournament’s first 6 red shootout tiebreaker.

Bale was on course for the third consecutive clearance from a successful break but went in-off trying to obtain position for the eightball. Davies took the initiative and later compiled a successful sequence to move 3-1 up and seemingly on easy street.

However, the already eliminated Bale put together a dramatic late surge to raise Sullivan’s hopes as he cleared from Davies’ dry break in frame five and then produced another break and finish from his break to make it 3-3 with just over four minutes remaining on the clock.

A draw would have sufficed for Davies, but it started to look like the unlikely turnaround was on the cards when he broke dry in the decider. Despite his best efforts, though, Bale ran into trouble on a clearance and 23-year-old Davies kept his cool under pressure to clear the table and get over the line a 4-3 winner.

The event returns to our screens in the new year with a group containing former WEPF world champion Phil Harrison.

The above image is courtesy of Andy Dart 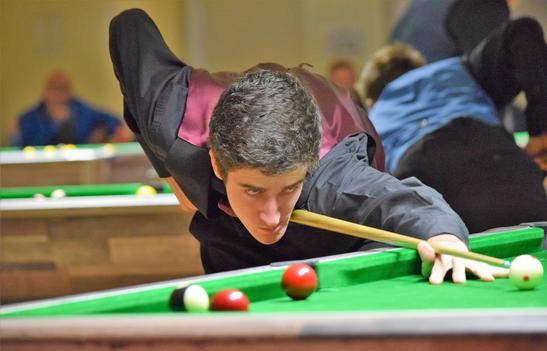