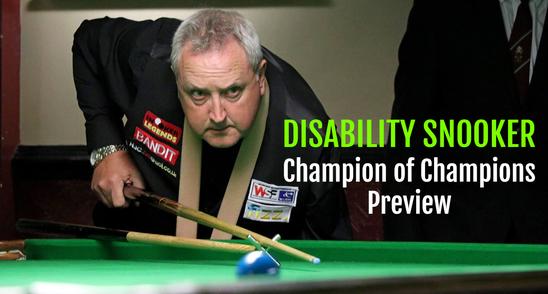 World Disability Billiards and Snooker showcases its newest event this weekend at the South West Snooker Academy in Gloucester with the inaugural Champion of Champions.

Similar to the professional version that we see in Coventry each year, this latest edition to an ever expanding WDBS calendar is an invitational that brings together the winners and best performing players from the circuit over the last few seasons.

The selected few here have qualified via their results between November 2015 to May 2018. All 6 classification categories will have their own events, but collectively everyone will compete at the purpose built academy for the Nick Oliver Trophy.

If you are not aware of the classifications, you can visit the official WDBS website where it explains each category in more detail. The organisation tries to make competition inclusive and fair for all players with disabilities. This includes wheelchair users, amputees, limb and ambulatory impairments, sight and hearing impairments and intellectual impairments.

Each tournament this weekend - which have generously been sponsored by the world renowned cue maker John Parris, will feature four invitees who will initially play in a round robin format. The top two will then contest the final.

As well as competing for the prestigious title, trophy and prize money on offer, as if there wasn't enough pressure, the winners will also qualify themselves for the World Snooker Federation Championship in Dubai next year. Another regular and enthusiastic sponsor of the WDBS vision, talent agency Fizzthinks360 will help fund these champions' travel and accommodation costs to and from the Middle East.

The World Snooker Federation mixed gender tournament is the most lucrative amateur Snooker event in the world with the furthest progressing players earning spots in the Crucible qualifiers and even professional tour cards. WDBS, along with the Women's Snooker and World Seniors circuits, work in partnership under the WSF's structured umbrella.

​The WDBS scene continues to get busier in terms of events, entries and different nationalities taking notice and taking part. In only its third full year of operation, the Champion of Champions will be the eighth staging of the year, with November's Hull Open being the ninth. In March WDBS held its first event outside of the UK in Bruges with the successful Belgian Open.

As momentum builds, line-ups are becoming more cosmopolitan too with last month's record breaking Open Disability Championships boasting entries from Belgium, Poland; even India and Hong Kong. Talks are ongoing with other countries too. Recently, chairman Nigel Mawer QPM and Sports Development Manager Chris Hornby were both present at the WPBSA-CBSA World Snooker Academy in Beijing to host a WDBS Open Day there, which was well received and gained media exposure.

One of the target aims of WDBS is to get Snooker rightfully back into the Paralympics programme. Snooker was one of the founding member sports of the formerly called Stoke Mandeville Games which were created by Dr. Ludwig Guttmann, having presence in Rome (1960), Tokyo (1964), Tel-Aviv (1968), Heidelberg (1972), Toronto (1976), Stoke Mandeville (1984) and Seoul (1988). It is unclear why Snooker was not included for the Barcelona Games in 1992 and since then.

WDBS has listened to advice and enlisted the help of the popular and respected Paralympic Broadcaster Rob Walker, who was at Northampton last month as an ambassador and to discuss with the board about ways moving forward as it tries to apply for future inclusion in the quadrennial Games.

Significant progress appears to have been made by WDBS in just three years, but they have even bigger plans and dreams ahead. A seriously competitive circuit with rewards that ambitious players can aim and aspire for, this weekend's Champion of Champions is another new landmark on the journey.