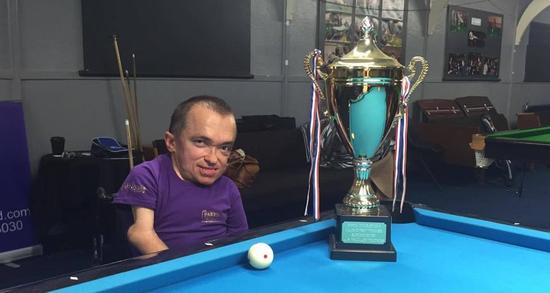 ​Action at the inaugural WDBS Parris Cues Champion of Champions is now underway; whilst each classification group will be playing their own event, collectively all the competitors in Gloucester will be aiming to win the Nick Oliver Trophy.
​
Nick was a very popular character on the Cuesports scene, both as a player and a fan, for many years. Born in Clapham in 1973, Nick suffered from brittle bone disease which meant he required the use of a wheelchair. His condition also later caused him to become deaf.

However Nick, who worked as an administrator for the Lewisham Council, discovered a profound love for Snooker - a passion that he never relinquished.

Watching the sport as a youngster his baize hero was Willie Thorne. Nick’s mother could see the admiration he had for him and decided to start writing to her son’s Snooker idol.

Through these letters a friendship blossomed. Willie got to know Nick and his family well, every year he would send them complimentary tickets to watch the World Championship at the Crucible Theatre. The former World Number 7 and Classic Champion also encouraged Nick to participate in playing the sport.

Needing a cue to take it up, Thorne put him in contact with the world renowned cuemaker John Parris, who supplied Nick with the relevant equipment moving forward. John too developed a long lasting bond with him. It is fitting that Parris Cues is the title sponsor of the WDBS Champion of Champions.

As well as Snooker, Nick competed in American 9-Ball Pool where he was frequently seen on the British Wheelchair Pool Players Association (BWPPA) tour. Recently as 2016 he topped the Challenge Tour rankings list and was named the Player of the Year. He won several events and trophies during his time on the circuit.

Nick, who had a brother and was also a lover of music, sadly passed away in 2017. In tribute of his friendliness, the way he conducted himself despite adversity and his impact within the sport, it feels right that the trophy at the WDBS' most lucrative event is named in his honour. His legacy will always live on.

The image above is courtesy of the BWPPA.

Article written and published by Michael Day on 19th October 2018