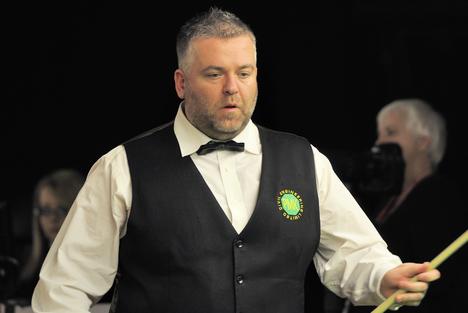 DO YOU REMEMBER THESE QUALIFYING UPSETS?

Judd Trump's 5-0 thumping at the hands of Sam Craigie in World Open Qualifying this week isn't the first time a marque player has dramatically come a cropper before the TV stages of a major tournament.

Craigie is young and talented himself, but this shock scoreline came out of the blue. With the increasing strength and depth of the professional tour nowadays, though, these qualifying rounds appear to be a bigger banana skin than before.

Let's look at some results in the recent past that also caused a stir...

It was pretty much the start of the new 2014/2015 season. The previous campaign had been a record equalling one for China's top player after he won an incredible five major ranking events. His season did end in deep disappointment though at the Crucible when he went down to debutant qualifier Michael Wasley at the first hurdle.

Needing to win a match in the UK to qualify for his home event in Wuxi, Ding was sensationally dumped out 5-0 by amateur top up player Oliver Brown.

With the exception of Frame 3 when Brown made a 72 break, all the frames were close, but it was the Englishman who recorded the result of his short career so far.

In reality the outcome was a corporate disaster for the tournament. Not having local hero Ding present for the venue stages must have been very frustrating for all involved.

The implication of this has since helped result in seeing the top Chinese players' opening round matches heldover to the venue, in order to guarantee their appearance.

Brown, who has yet to earn a pro tour card, has amassed some impressive scalps as an invited entry to top tier tournaments. He has also defeated Ken Doherty, Ryan Day, Mike Dunn, Jamie Cope, Dave Harold, Gary Wilson, Andrew Norman and Nigel Bond. In Wuxi he also eliminated Oliver Lines before losing 5-1 to Martin Gould in the Last 32.

Mark Selby was experiencing his maiden spell as the World Champion. He started the season well by lifting the Riga Open trophy.

Requiring one win to make the venue stages of the most profitable overseas event on the calendar at the time, Selby was paired with rookie professional Oliver Lines in the preliminaries.

Everything was going according to plan for The Jester; even more so as he went into the mid-session interval 4-0 up in the best of 11 fixture. He was comfortable having knocked in efforts of 57, 78, 92 and 115.

However, the turnaround on resumption was simply enormous. Lines, who surely must have been considering the clean sweep, froze his opponent out in the next two with breaks of 84 and 76 to get a foothold.

​Lines won the seventh on the black and a 80 in the next helped him level up at 4-4. He then finished the job by taking the last two to record a 6-4 victory and to deny the World Champion.

This week wasn't the first time Judd Trump had been severely upset in a non-TV round in recent times.

​The inaugural International Championship winner was stumped by returning professional Michael Wild at the Qualifying Round for the 2015 edition.

​Trump was playing a fortnight after losing in the final of the Shanghai Masters to Kyren Wilson in a deciding frame, so he appeared to be in good form.

However, it was 2015 European Amateur Champion Wild who would advance through without response. He recorded a trio of half centuries in a remarkable outcome.

​What makes the result even more memorable is that it was Wild's only success of the entire campaign (albeit he didn't enter every event). In Daqing he was on the wrong side of a 6-0 scoreline when losing to Sanderson Lam.

Neil Robertson was riding the crest of a wave at the end of 2015. The Australian was experiencing a lucrative purple patch that saw him win the Champion of Champions and UK Championship back-to-back.

However, his 11 match winning streak was stopped in emphatic fashion by amateur top up player Ashley Hugill in the opening round of the 2016 German Masters, which was played at the Robin Park Sports Centre in Wigan.

​Despite Robertson making a break of 103 in Frame 2, Hugill won the match 5-1, crafting runs of 56 and 85 after the mid session interval.

The youngster was stopped (by the even younger youngster!) Zhao Xintong 5-1 in the next round. Earlier this year Hugill earned full professional status when he graduated from Q-School.

OK, OK, I realise this isn't exactly recent, and that the match took place at the venue, although it was before the TV stage, so therefore I'm putting it in. My rules!

I don't say this lightly, but possibly the most incredible scoreline in the histroy of top flight snooker?

Hendry was going through a trying spell, and had seen his World Number 1 status go to fellow Scot John Higgins at the end of the previous season. But it would be another compatriot who would dish out Hendry's most embarrassing defeat (and those were extremely rare - especially in the 90's).

A round before the BBC cameras were turned on in Bournemouth, Marcus Campbell became an overnight sensation when destroying Hendry 9-0 in the Last 64 of the UK Championship.

There wasn't a plethora of breaks, although Campbell did tot up a quartet of half centuries - the highest being an 81. Thoroughly thrust into the big time limelight, Campbell beat Quinten Hann in the next round, but would be eliminated by Steve Davis 9-7 in the Last 16.

​The multi-session match was played over two days, the 5 time UK Champion trailed 8-0 overnight and had to return next day.

For Hendry, the loss meant a lot of soul searching. During the press conference he talked about 'going back to the drawing board'. He also said this had been coming.

​As is the case with sporting legends, though, the crushing defeat sparked him into a resurgence. Bouncing back, he immediately won the invitational Malta Grand Prix the following week.

​Later in the season he won the Scottish Open and Irish Masters, before capping it all off with a record breaking seventh World Championship title at the Crucible.

Safe to say he reacted well...

Written and published by Michael Day on the 8th August 2017​​