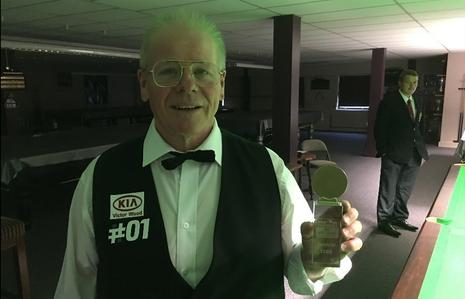 Les Dodd - who played at the Crucible Theatre in 1983, 1993 and 1994, became the first qualifier for the newly assembled UK Seniors Championship in Redhill later this year.

As part of the new, innovative World Seniors Tour throughout the season, the UK Seniors will be the first of four main stage events alongside the Seniors Irish Masters, Seniors Masters and World Seniors Championship.

Each tournament will feature household professional names from the past and present, who will be joined by qualifiers at the venue.

​For the UK Seniors Championship, there are four qualifying competitions from clubs in England (3) and Scotland (1). The winner of each one advances through to meet the seeds.

A very popular character of the snooker community, Dodd once climbed high as Number 36 in the World Rankings. Also amongst his personal accolades he reached the final of the 1987 English Professional Championship, and in the same year he became the 'WeightWatcher of the Year' when he lost 7 and a half stone.

32 players entered this opening leg of qualifying at the Crucible Sports and Social Club in Newbury. Dodd made the Semi-Finals after wins over James Galigan (3-0), Peter Delaney (3-1) and Mark Turner (3-0).

In the Last 4 he would face colourful character and fellow ex-professional Lee 'The Shirt' Richardson. The pair were locked at 2-2, and as is the format in these Snooker Legends events, the tie was decided on a 'Black Ball Tie Breaker', which Dodd sank to secure a final berth.

​There he would cross cues with England International Simon Dent, who had earlier produced the highest break of the weekend with a 103. However, it was 63 year old Dodd who emerged a 3-1 victor. As well as a place in Redhill, he also banked £500.

The UK Seniors Championship will be decided between the 23rd-26th October. The next qualifying opportunity will be at the Oldham Snooker Academy in three weekends time.

​If you wish to enter any of these events, or want to find out more about the World Seniors Tour (including ticket information),please visit snookerlegends.co.uk

Written and published by Michael Day on the 6th August