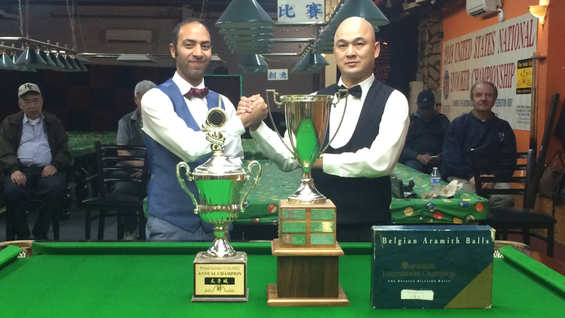 ​Held at the Prince Snooker Club in Brooklyn, New York, this was the 26th edition of the biggest tournament on the United States Snooker Association (USSA) calendar. Played across a quartet of days and completed on Memorial Day Monday, the starting entry was initially split into groups with qualifiers making the Last 16 Knock-Outs.

Elsayed, who recently competed in events 1 and 2 of Q-School in England, won all six of his fixtures without dropping a frame to top Group B.

In the Last 16 and 8 he continued his perfect record with victories over Thomas Tan (3-0) and then Tim Lee (4-0). Two-time winner Ajeya Prabhakar was defeated 4-2 in the Semi-Finals.

Elsayed's opponent in the final was fellow New Yorker and defending champion Raymond Fung, who was also undefeated on route. However, Fung had to come back from 2-0 down against Henry Wong in the Last 16, eventually coming through 3-2 on the final black.

​The Best-of-9 Frames final saw Elsayed take a 3-1 advantage into the mid-session interval. On the resumption he extended that lead to 4-1, and although Fung chalked up Frame 6, the job was complete for Elsayed in the following frame, recording a 5-2 result.

To find more about the event and to see the full results, please visit the snookerusa.com website here.

Image above is courtesy of the United States Snooker Association