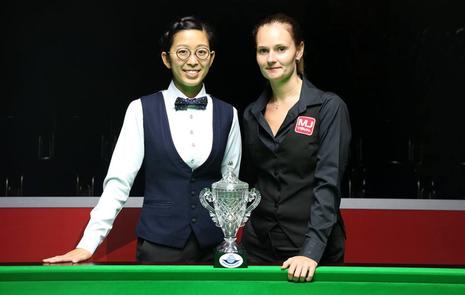 Sports at the top level thrive on rivalries; snooker is no exception.

Currently in the Women's game we are being treated to a real struggle for power between the discipline's two most dominating forces - Reanne Evans and Ng On Yee.

At the weekend, Hong Kong's On Yee added yet another title to her collection when she won the Eden Masters at the South West Snooker Academy. In the final she ousted Evans 4-3.

It was the latest in an ongoing saga featuring the World's two top ranked females. So far on the WLBS circuit this season all three finals have been contested by the pair.

At the Paul Hunter Women's Classic in Furth at the end of August Evans gained revenge for her defeat 12 months previously in a 4-1 success, but at the UK Championship a few weeks ago On Yee reversed the scoreline.

Looking back at the end of the last campaign, On Yee also got the better of her foe at the World Championship in Singapore, dethroning Evans 5-4 in the Semi-Finals. The Asian cueist then came through a 6-5 thriller against India's Vidya Pillai to secure her second WLBS World Title.

The landscape of the Women's game has certainly changed over the last 3/4 years. Defeat for Evans was virtually unheard of in any event; she claimed the World Championship for 10 consecutive years from 2005-2014. Her win in 2014 was confirmed following a 6-0 clean sweep of On Yee.

​However, the 2015 edition of the event saw On Yee end the champion's decade of supremacy with a 4-2 win over her in the Semi-Finals, she then completed the job against Emma Bonney in the Final.

​Fast forward a year, though, and Evans made it World Championship Number 11 when she defeated the defending champion 6-4 in another final meeting.

Undoubtedly, for the growth, profile and entertainment aspects of the sport, it is affluent to have a rivalry such as this. Evans (32) and On Yee (26) appear to also have a number of years at the top ahead of them.

There have been some great Ladies World Champions in the past - Alison Fisher, Kelly Fisher and Karen Corr, all of whom got disillusioned with the Women's Tour at the time and changed careers to concentrate on the richer rewards within the American Pool circuit.

Statistically Evans stands well ahead of them. With the before mentioned players ending their snooker participation early by choice, though, it is perhaps debatable who the greatest female snooker player of all time is.

In terms of the top two at the minute, I would suggest Evans is a heavier scorer (she actually made a 139 break in Gloucester at the weekend), but this hasn't stopped On Yee getting the better of her on a number of occasions.

As a fan, I look forward to seeing them cross cues many more times.

Written by Michael Day on the 31st October 2017