Fan never led in the final. Breaks of 69, 67 and 55 helped Luo establish a 4-1 advantage, but perhaps crucially, Fan made an 87 in the frame just before the interval to reduce his arrears and keep in touch.

On the resumption the next four frames were split leaving 17 year old Luo on the brink of victory, however, the younger of the pair managed to force a decider.

It seemed as if Luo wasn't to be stopped after all when he crafted a small lead in the 13th and final frame, but Fan got a foothold, meaning the most prestigious youth tournament on the planet would be confirmed on the colours.

After safety exchanges and tricky opportunities on both sides did not materialise, a poor safety on the blue from Luo allowed his opponent in to pot match ball. A few minutes later Fan dispatched the pink to seal it.

This major victory also rewards Fan with a two year professional tour card starting from the 2018/19 campaign. It will be a sweet one for him having been denied a main tour ticket by fellow Chinese cueist Yuan Sijun in the final of the Asian Under 21s a few months ago in India.

Many people this week predicted an all-Chinese conclusion. Both finalists remained undefeated on route.

Throughout the week at the supremely well equipped CBSA World Snooker Academy in Beijing, home player Luo had been the most notable candidate - dominating proceedings from the start.

In the Groups Phase he won all three of his fixtures 4-0 to emerge as the Number 1 seed for the Last 32 Knock-Outs. He then continued his ruthless streak in those KOs, making the final with a frames won/lost record of 33 and 5. The amateur snooker community had been made aware of Luo last year when he made a 147 in competition.

Champion Fan was also punishing though. Having dropped just four frames in Group K, he then beat

Elsewhere in the tournament, Tyler Rees (Wales) was the last standing non-Chinese entrant come the Last 4, but he was comfortably dispatched by Luo, 6-1. In the Last 16 Rees had beaten high profile compatriot Jackson Page 5-4.

Other notable European efforts came from Ben Fortey (Wales) and Noel Landers (Republic of Ireland), who both reached the Quarter-Finals from an original starting entry of 71 players from 24 different countries.

There were many centuries and big breaks in Beijing, with Fan topping the numbers courtesy of a 135.

With the new professional snooker season already a couple of events old, Fan will have to wait until next year to play on the top tier. It may be a little frustrating for him, but at least he will be able to prepare for the promotion - it seems likely the youngster will join up with the ever growing Chinese snooker community based in the UK.

There is a good possibility he will be invited to World Championship Qualifying at Ponds Forge in the Spring, though.

It is now surely time for the world to take note of these Chinese youngsters and only a matter of time before a group of them make a significant breakthrough.

12 years ago Ding won the China Open as an 18 year old - this is the next generation who were inspired by that historic victory.

Thailand's Nutcharat Wongharuthai stopped a Chinese Double by creating a Double of her own in the World Under 21 Women's Snooker Championship.

Earlier this week the 17 year old Thai claimed the World Under 18 Open. She added another trophy by defending the World Under 21's category following a 5-3 final success over the host nation's Yuying Xia 5-3

The picture above is courtesy of the International Billiards and Snooker Federation (IBSF).


Written and published by Michael Day on the 16th July 2017 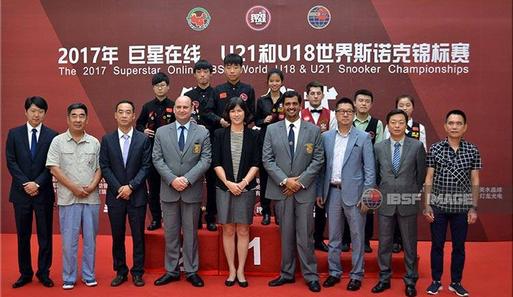