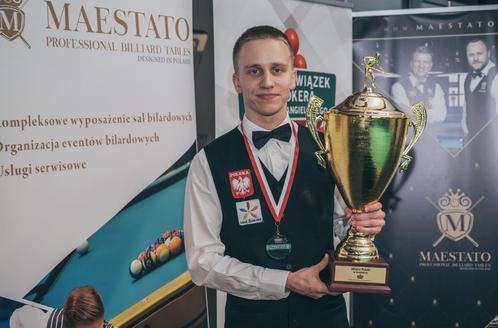 The 27th annual edition of Poland's biggest amateur event, which was open to all Polish citizens and residents, was held at the 147 Break Snooker & Billiards Club in the capital city of Warsaw.

In what was the culmination to the 2018/19 season, the final stages of the championship featured 32 players initially split into eight round robin groups of four, with the top two from each progressing to the single elimination phase.

​The line up featured players who had earned their place from either the TOP16 league or national ranking list. It also saw two of Poland's top female players - Ewelina Piślewska and Katarzyna Bialik, awarded wildcards.

The majority of the fancied competitors made it through the groups, although defending two-time champion Mateusz Baranowski was eliminated when he finished third in a tough section behind 2016 winner Tomasz Skalski and Michał Ebert.

Filipiak, European Under 21 champion in 2011 and who debuted on the professional circuit as a 15-year-old, comfortably topped his group, dropping just one frame.

​He continued to be relentless when dispatching Michał Kotiuk (4-0) and Skalski (5-0) in the last 16 and quarter-finals respectively.

However, in the semi-finals he exhibited other qualities when facing the similarly undefeated Grzegorz Biernadski (who had defeated Kubalski in the last 16), needing to win the last three frames to squeeze through 5-4.

In the final the now 23-year-old Filipiak met debut finalist Paweł Rogoza, an opponent a year younger and who had also yet to taste defeat. Rogoza had ended the hopes of Bondarewski (4-1), Juszczyszyn (5-3) and Daniel Holoyda (5-2) on route.

Rogoza started the final well by taking the opener with a break of 82, but Filipiak began to flex his muscle, being helped with breaks of 58, 57 and 55 as he took the next five frames to move to within one of glory.

Resistance was shown by Rogoza, who reduced his arrears to 3-5, but a further run of 58 aided Filipiak to get across the line in the ninth to claim the title for the second time after his first win in 2014.

A library of live streamed matches from the championship can be viewed on YouTube via this link.

To view all the results, please visit here and here.

​Many thanks to tournament organiser Patrycja Gromadzińska who helped us compiled this article - it was greatly appreciated!