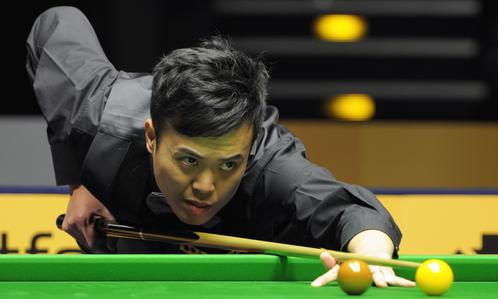 Marco Fu's rich vein of form continued as he progressed to the Last 4 of the 2017 World Grand Prix with a 4-2 victory over fellow in-form cueist Mark King. The Scottish Open champion has now at least reached the Semi-Finals in 4 of the last 5 completed events.

However, this is in stark contrast to the very average start he had to the new 2016/2017 season.

Fu began the campaign off the back of a great run to the one table set-up at the Crucible where he was narrowly ousted by eventual champion Mark Selby.

​Unlike a lot of other Top 16 players, Fu entered the opening trio of overseas tournaments.

In Latvia (Riga Masters) he lost in the Last 64 stage to Graeme Dott 4-3, in the Indian Open he was swept aside by Dominic Dale in the Last 32 4-0, whilst at the World Open in China he went down 5-3 to Sam Craigie in the Last 64. His four victories in those events were all against amateurs.

His poor form and results continued in the next batch of events. David Gilbert eliminated him at the first hurdle in the Shanghai Masters, Andrew Higginson thumped him 4-0 at the European Masters Last 32 phase and Tom Ford stopped him 4-2 in the Last 64 of the English Open.

The biggest competition of the season so far was next up with the International Championship; an event where Fu has been a finalist before. Yet his worrying sequence continued when Sam Baird beat him in the Last 32 - the same player upset him again in the Last 64 of the Northern Ireland Open the following month.

Fu did shock Ding Junhui in Round One of the new invitational China Championship, but the facts were that in the opening 8 ranking events of the season Hong Kong's Number 1 player had yet to even reach a solitary Last 16. A truly staggering statistic for someone of such quality.

It also left him 16th in the World Rankings going into the UK Championships, and therefore uncertain over whether he would qualify for the prestigious Masters.

The turnaround since then, though, has been amazing.

He was perhaps unlucky not to have reached his second UK final when he lost to Ronnie O'Sullivan in the Last 4 at the Barbican Centre in York.

Straight after, just before Christmas, he won the Scottish Open with a simply superb 9-4 final performance over John Higgins to claim his third career major ranking title.

Great wins over Judd Trump and Mark Allen put him into the final weekend of the Masters at the Alexandra Palace, but once again (like it has happened to so many) O'Sullivan denied him a final berth.

A surprise defeat in China Open qualifying and a Last 32 loss at the German Masters (to Gilbert again) last week hasn't put Marco off for his bid to lift the World Grand Prix trophy; so far in Preston he has defeated Jamie Jones, Anthony McGill and King.

One of Fu's features during his dramatic upturn in form and results has been his comprehensive break building. Since the start of the UK he has amassed 27 century breaks; many of which have been big three figure contributions.

​This is arguably the best purple patch of the 39 year old's career to date. He will start his match with Ryan Day at the Guild Hall as favourite. Should he come through, he will probably also be favoured against waiting finalist Barry Hawkins; another player having a fantastic few months.

Written and published by Michael Day on the 11th February 2017