It is an idea that has been mentioned in the past, but has resurfaced on Twitter this week.

Snooker is generally an individual sport, although we all probably started out as players competing in local snooker leagues for our club. There have been team events before on the professional circuit; the World Doubles event in the 80's seemed quite popular, as did the 3-player World Cup / Team Championships. Nowadays we have a combination of both with the modern day World Cup being held every (2 or 4?) years consisting of the highest ranked pairing from each country involved.

Slightly a different concept, but could we ever have a Mosconi / Ryder Cup style event in snooker? Perhaps inspired by seeing these events on TV, I remember last year's UK Championship Semi-Finalist David Grace suggested something involving a Chinese team a while back.

Earlier this week on Twitter, Neil Robertson responded to a fan's tweet regarding a GB v The Rest of the World event. The Australian named a potential five person team of himself, Ding Junhui, Liang Wenbo, Marco Fu and Thepchaiya Un-Nooh.

On the exhibition circuit, the popular Snooker Legends tour have previously had a similar show, and this January have the third of their England v Ireland Legends event from Goffs.

Obviously there would be many, many things to discuss and work out, but let's base a team event involving GB and Ireland players against players from the Rest of the World. 5 players in a team, the top five of each qualifying from the current World Ranking list.

On these terms, if we had an event next week, the teams would be -

As we can see, the ROW team is not far off what Robertson wanted, with World Number 31 Brecel piping World Number 32 Un-Nooh. But just like the Ryder and Mosconi Cups, could teams pick a wildcard? It would be a way someone like Ronnie O'Sullivan could be in the GB&Ire team.

What about the idea of a non-playing captain too? A Hendry, Davis, White or Thorburn, Wattana, Drago in their respective roles perhaps?

It also got me thinking what the teams in the past would have been. I looked at the rankings at the start of each season five years apart...

Who would have won these previous match-ups? I think the 1986/87 GB and Ireland team may have been a clash of characters!

I remember when Barry Hearn came in to take over the sport, he said he wanted tournaments to have their own identity. Something like this would certainly be unique to the calendar, but would the players, fans and sponsors embrace it?

Written and published by Michael Day on the 20th October 2016 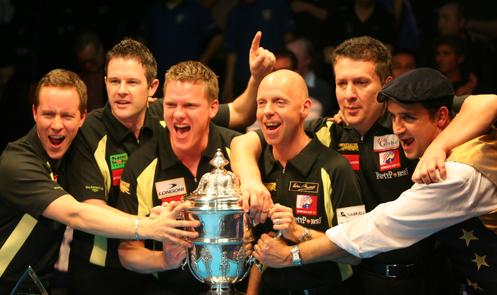