Peter Gilchrist made it three in a row on the World Billiards circuit with success at the 2018 LITEtask UK Open at the Northern Snooker Centre in Leeds.

Held across the long Easter Holiday weekend, the starting entry of 36 was split in Round Robins with the top two players from each qualifying for the Last 16 Knock-Outs.

Former multiple-time World Champion Gilchrist had no worries finishing top of his group after winning all four of his fixtures and making a quartet of three-figure runs in the process.

Efforts of 213 and 103 helped him to a comfortable 917-169 elimination of Eddie Duggan (Wales) in the Last 16, whilst another brace of centuries (158 & 154) and a tournament high of 440 contributed to an even wider method of victory of 1019-175 against Darren Clark (England) in the Quarter-Finals. Jonathan Marwood (England) was also dispatched with plenty of change in the Semi-Finals, 997-327; the Singaporean citizen racking up further notable runs of 315 and 178.

Gilchrist's opponent in the final was Robert Hall (England), who had seen off reigning World Champion Dave Causier by 265 points in the other Last 4 tie.

In a predictably close title decider, Hall led by 48 points at the mid-match break, but Gilchrist managed to turn it around and record a 796-667 win. During the encounter he crafted breaks of 101, 102, 186.

After securing titles at January's Scottish Open and February's South Australian Open, this trophy means a successive hat-trick for Gilchrist on tour. He is next scheduled to compete at the 2018 Club Marconi Sydney Open later this week where there is a very healthy contingent of home cueists.

Many thanks to Chris Coumbe for his information on this tournament. The above image is courtesy of World Billiards. 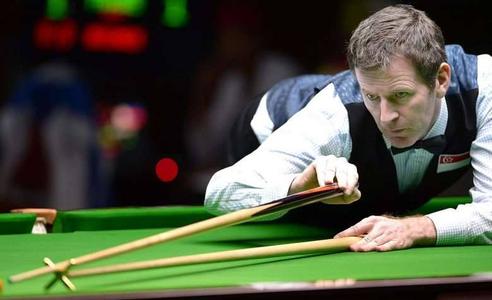