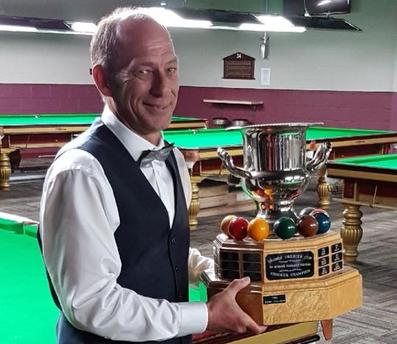 Brady Gollan, a former professional player who qualified for the Crucible in 1990, is the 2018 Canadian National Snooker Champion. It is the second time he has won the title and it comes 30 years on from his first in 1988.

The annual tournament was held at the Corner Bank venue in Toronto, which is owned and run by familiar Cuesports figure Jim Wych, between the 3rd-6th May. 49 players entered and this year the competition was played as a straight Knock-Out.

World 9 Ball Pool Champion Alex Pagulayan, who went on to reach the Quarter-Finals before being stopped by Gollan.

On his route to the final, Gollan eliminated Chase Cyr, Amar Sadig, Pagulayan and Derrick Claus. In the title match he faced 2014 winner Alan Whitfield, whom he defeated 6-4 to take the accolades and a $3,200 payday.

There was live streaming for the championship and commentary in the final came from both Wych and Cliff Thorburn. The 1980 World Champion has recently joined the Canadian Billiards and Snooker Association (CBSA) board.

Positive steps are appearing to be made in Canada - a country with a rich snooker heritage. It was announced that there will be an event in December where the winner will qualify for a World Seniors competition, whilst next year's Canadian Championship will have a guaranteed minimum of $10,000 added to the pot. Both will be held at the Corner Bank.

The Canadian Seniors Snooker Championship, which is in memory of ambassador William “Dutch” DeBoer, was played at the same venue in April. Floyd Ziegler defeated Fern Loyer in the final to claim the title.

​​​The picture above is courtesy of the Canadian Billiards and Snooker Association.