​The Grand Final was the culmination of this year's five event series that visited several venues across the north of the county.

50-year-old Twist, who had already won Events 1 and 3 on the circuit, managed to survive his opening match when he ousted former IPA professional Perry Durant, 7-6. He then had a more straightforward outcome in the Quarter-Finals when eliminating Scott Beckerleg, 7-1.

​The 2000 and 2002 WEPF World Title winner had to endure another deciding frame when overcoming Event 2 conquerer and reigning Players Amateur Champion Greg Batten, 8-7, in the Last 4. The Grand Final was a repeat of the Event 1 climax from April, with Jason Beck making it through following wins over Matt Boylan, Rik Williams and Andy Coles earlier in the day.

Consistent Beck, who was also the runner-up at the second event, was unable to make it third time lucky, though, as Twist registered a comfortable 8-3 win to claim the tour's biggest title.

Bideford MS Autos and Watts and Sons Roofing were the official sponsors of the 2018 North Devon Blackball Tour. Their support was instrumental in getting the concept working.

Picture above is courtesy of the North Devon Blackball Tour 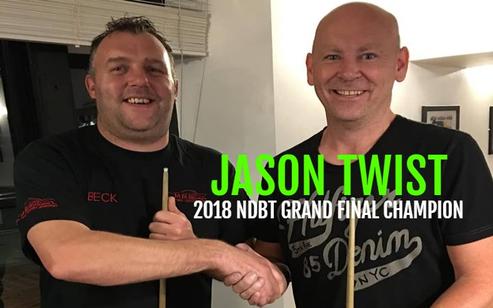