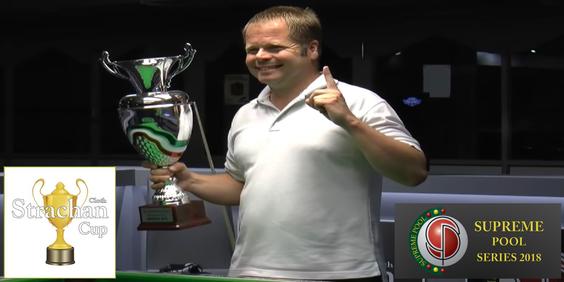 Phil Harrison drew upon his extensive palette of experience to claim the 2018 Strachan Cup; event 2 of the newfangled Supreme Pool Series.

128 of English 8 Ball's top talents traveled to the Players Pool and Snooker Lounge in Stoke-On-Trent for this unique three-day tournament. A strong contingent from UK and Ireland was joined by entries from Europe, Africa and even Australia - another example of the significant progress this series has made in trying to unify and grow the profile of the sport for competitors and fans alike.

Harrison began his campaign with comfortable 11-2 wins over Matt Brierley and Richard King before dismantling global Cuesports star Chris Melling 11-4. The composure of Harrison's game was then shown as he ousted former IPA World Champion Gareth Hibbott 11-10 in the next round.

The 2009 WEPF World Champion's route to the title wasn't without troubles, though, as he was pushed to the Losers Section following an 11-9 defeat to Jordan Church. However, Harrison re-grouped by seeing off Lee Clough 8-6 to qualify for the single elimination Quarter-Finals, where the competition was effectively re-set.

​There was a stellar line-up for the Last 8, but inevitably there were big names who still missed out.

Melling lost two games in a row and was eliminated by double World Champion Tom Cousins, who himself was denied in the subsequent round by Shaun Storry. IPA World Champion Ben Davies was also one of Storry's other victims.

US Open 9 Ball Champion Jayson Shaw won a trio of matches in total but his bid was eventually ended by IPA World Number 1 Marc Farnsworth via a deciding frame. Farnsworth would exit the event to Stephen Dempsey during his next outing.

Scott Gillespie, champion of the season-opening Jason Owen Open in May, suffered the earliest possible avenue of elimination when he lost to Melling and then Matthew Schofield straight off.

BCA Hall of Fame member Darren Appleton navigated his first fixture but sadly had to withdraw from the tournament due to personal reasons.

Harrison chalked up five consecutive frames to turn a 9-6 deficit into an 11-9 victory against Harjeet Singh. Singh, who represents India, had already won the best 'non-elite player prize' with an impressive run of results throughout the long weekend.

Recently crowned the WEPF World Champion for a record-extending fifth time, pre-tournament favourite Mick Hill was living up to expectations on debut having qualified undefeated, although he did have to survive final frame finishes against Craig Lakin and Yannick Beaufils. A more straight-forward 11-4 win over Church put him into the Last 4.

Joining Harrison and Hill in the Semi-Finals were Liam Dunster and Jon McAllister. Dunster stopped Karl O'Donoghue's tracks, 11-5, whilst McAllister came out on the right side of an absolute thriller with Northern Irish legend Ronan McCarthy, 11-10.

Both match-ups in the Semis were repeats of the latest WEPF and B.I. World Championship Finals.

Harrison was peerless and efficient as he crossed cues with long time adversary Hill, capitalising on his fellow Englishman's dry breaks to record a resounding 11-3 outcome in his favour. The result would go someway to serving revenge on an opponent who had denied him another world title in each of the past two years.

Reigning B.I. World Champion Liam Dunster was once again proving why he is one of the sport's hottest properties. The consistent Scottish youngster, who only a few weeks ago claimed the IPA Champions Cup title, sealed back-to-back final appearances on the Supreme Pool Series with a gut-wrenching 11-10 triumph against McAllister.

An intriguing final developed between two players with very similar styles - both on and off the table. However, possibly because of the occasion and the grueling nature of the event throughout, there were uncharacteristic early mistakes on both sides.

Harrison managed to open up a lead, though, an advantage that he always maintained. Well past the midnight hour he eventually confirmed an 11-8 victory to earn himself £5,000 and another highlight onto his illustrious CV within in the sport.​

While Dunster will be disappointed to finish as runner-up on the series again, he will buoyed by the fact that both of these competitions were played to World Rules, which isn't his primary rule-set. He will be even more comfortable and dangerous for the next two stops on the series which are both played to Blackball Rules, his preferred discipline.

The stakes are raised for the Supreme Pool Masters which takes place 17th-19th August at the same venue, where the champion will walk away with £13,000 and one of the most prestigious titles in English 8 Ball Pool.

Following the K8.com Classic in late September, the series reaches boiling point in December with the Home Leisure Direct Grand Finals which boasts a record-breaking £51,000 first prize - the biggest in the sport's tournament history.