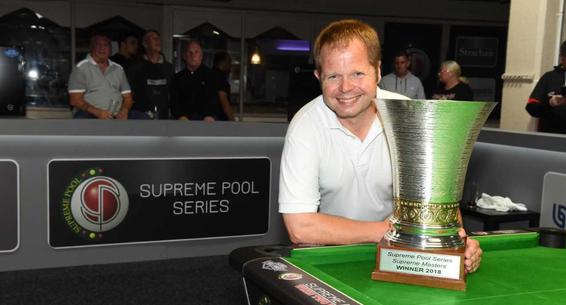 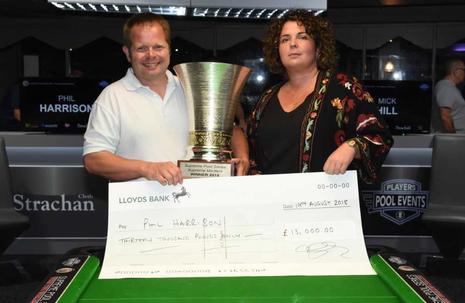 Harrison was presented the beautiful trophy by tournament and series sponsor Laura Martin from Supreme Pool. He also banked a handsome £13,000 cheque, the largest amount, so far, to be awarded in English 8 Ball Pool this year.

When you regard Harrison's early disappointment on the Friday afternoon, the amount of, and standard of the players he faced subsequently, this is a remarkable achievement. You would be hard pushed to find a tougher and more grueling path to glory within the sport.

The 2018 Supreme Masters grabbed the imagination of the viewing public with live streaming of up to four tables on multiple platforms across the three days. On Facebook alone there have been a million reaches so far.


Article written and published on the 21st August 2018

Phil Harrison recorded one of the greatest tournament victories in the history of English 8 Ball Pool when he became the 2018 Supreme Masters Champion last weekend.

Contested at the renowned Players Pool and Snooker Lounge, the tournament was the third leg of this year's ground-breaking Supreme Pool Series which sees competitors from both rule sets, and the UK and beyond, crossing cues for a £152,250 total prize fund.

Already regarded as one of the sport's all-time legends, Harrison added another significant entry to his illustrious bio and boosted his popularity once again with the quiet and classy way he went about his business throughout.

Fresh from claiming last month's Strachan Cup, an exceptional brace of consecutive victories on the series looked like a forlorn ambition for Harrison when Darrell Whitworth caused an upset by defeating him 11-6 in the First Round.

Despite this early setback that pushed him to the very start of the Losers' Section, the former WEPF World Champion embarked on tackling a gauntlet of high profile names in order to get back on track. 44-year-old Harrison eliminated Tony Halpin, Ronan McCarthy, Zak Shepherd, Darren Appleton, Chris Melling and then Clint I'Anson just to qualify for the Last 16 Knock-Outs where the competition was effectively re-set.

Now back on a level footing with everyone else remaining, the Cambridgeshire cueist defeated current IPA Premier League leader Neil Raybone 11-6 and then IPA professional Drew Hughes 11-5 to reach the Last 4.

Max Nosko was enjoying a memorable run in Newcastle-Under-Lyme and had already secured the additional 'Best Non-Elite' prize after walloping 2015 IPA World Champion Jack Whelan 11-1 in the Quarters. The Bristolian's hopes were extinguished, though, by the eventual champion, 11-6.

Harrison's opponent in the final was none other than the reigning and five-times WEPF World Champion Mick Hill, who was once again the pre-tournament favourite.

Despite suffering from a neck injury which was clearly visible during his opening fixture on the main arena table, Hill won four straight matches to serenely qualify for the Last 16 undefeated.

During the Knock-Outs Craig Lakin held Hill at 8-8 before the latter pulled away with the last three frames. Further big name rivals in the form of Shaun Chipperfield and Marc Farnsworth would await Hill in the Quarters and Semis, but respective 11-6 and 11-5 scorelines saw off the danger.

Arguably the top two English 8 Ball players in the world today, the finalists would write another thrilling chapter into their ongoing saga. In recent head-to-heads Hill had denied Harrison in the 2017 and 2018 World Finals, but on his way to the Strachan Cup last month Harrison put on a clinic when he stopped Hill in the Semi-Finals.

In front of a live stream audience of thousands, predictably, the final was very high on quality with few unforced errors. The lead changed hands on several occasions and there was never more than two frames between them, but ultimately the pair found themselves locked at 10-10 and staring down a deciding frame with a difference of £8,000 in prize money and one of the most prestigious titles in the sport up for grabs.

​Having won the lag around an hour and forty minutes earlier, Harrison split the pack well and crucially made balls off the break. He then proceeded by coolly holding his nerves together and converting a finish in the same one visit for a memorable victory.​​