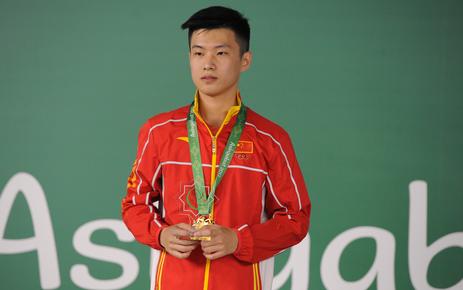 The 20 year old, currently 75th in the World Rankings, defeated fellow professional Hossein Vafaei 4-2 in the final at the Billiard Sports Arena.

In fact, the Semi-Final line up in Ashgabat was exclusively top tier talent as Zhou Yuelong (China) and Soheil Vahedi (Iran) claimed the Bronze Medals. The remainder of the entries were currently amateur.

Vahedi actually leaves the Games with three medals, one of each colour, following his Silver Medal finish in the 6 Reds discipline and Gold when partnering Vafaei and Amir Sarkhosh in the Team event.

In that 6 Reds Final 17 year old Yan Bingtao took the top honour after his 5-1 final victory, which means China did the double in the Men's Singles Snooker tournaments.

However, China was also very successful on the Pool Table too. In the Women's competitions, WPA World Ranked Number 1 Chen Siming won the 10 Ball Gold on Tuesday, whilst compatriot and current World Number 2 Han Yu was on the top step earlier in the Games for her efforts in the 9 Ball.

The Men's Scotch Doubles 9 Ball also went to China when Liu Haitao and Lu Haotian perhaps slightly upset the odds in getting the better of Chinese Taipei pairing of Ko Pin-Yi and Cheng Yu-Hsuan 9-7 in the Final.

In the other American Pool event during the schedule, it was an all Chinese Taipei final in the Men's 9 Ball which saw Chang Yung-Lin win the last three consecutive racks for a 9-8 hill-hill finish against Ko.

Elsewhere in the Cuesports programme India's Sourav Kothari ended the domination of Thailand's Praprut Chaithanasakun to get Gold in the Men's English Billiards. Chaithanasakun had won all three previous editions of the Championship in Macau (2007), Ho Chi Minh City (2009) and Incheon (2013).

The only Women's Snooker event was played in a 6 Reds format. Thailand once again showed their potential by having both representatives in the final. 17 year old Nutcharut Wongharuthai defeated fellow 23 year old Waratthanun Sukritthanes in that Gold Medal match.

Following on from the World Games in Poland and the South-East Asian (SEA) Games in Malaysia, this was the third time in recent months that Cuesports have been part of a major multi-sport festival. This sort of evidence should be used towards Cuesports' Olympic ambition.

For further information and the full results across all the categories, please visit the results page on the official 2017 Asian Indoor and Martial Arts Games website here.

Picture above is courtesy of Ashgabat 2017

Written and published by Michael Day on 26th September 2017