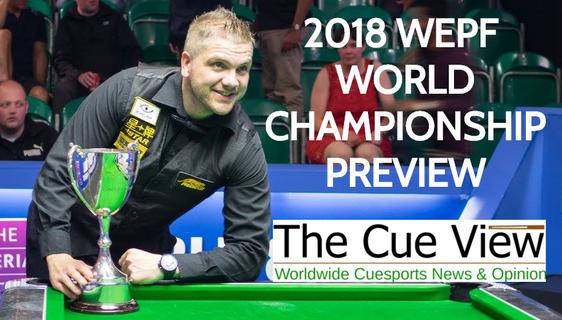 Defending champion Mick Hill is the pre-tournament favourite to win the 2018 WEPF World Championship which takes place in Blackpool over the next nine days.

12 months ago, Hill created history when he defeated fellow Englishman Phil Harrison 11-6 in the final to become the first player ever to have claimed this title on four occasions since its creation in 1993.

Despite currently being part-time on the English Pool circuit, with a lot of his efforts going towards his Chinese 8 Ball ambitions in the Far East, Hill is still the reference point in today's small table climate. However, there will be several worthy candidates who will be looking to upstage him.

After an absence of 12 years, global Cuesports star Darren Appleton returns to his roots in an attempt to sign off some unfinished business. A winner of several major international championships across different disciplines and a BCA Hall of Famer, Appleton has yet to land this title, coming so close in 2004 and 2006 when he was the Runner-Up to Hill and Mark Selby respectively.

Also in the draw are fellow Mosconi Cup winners Karl Boyes and the evergreen Lee Kendall, who once again will be captaining champions England in the team event that also takes place at the venue.

Models of consistency in this and many other events are back-to-back two times former champion Tom Cousins (who begins as second favourite) and 2009 victor Phil Harrison, who will both want to climb the summit again. Shaun Chipperfield (2016) and Adam Davis (2011) are the other previous champions to take part.​

Karl Sutton, who was the Runner-Up to Chipperfield a couple of years ago, goes into the championships in red-hot form having won both the latest UK Tour and Challenge titles last weekend.

​Not since Quinten Hann's victory in 1999 has there been a winner outside of England or Wales, however, the Republic of Ireland's Karl O'Donoghue is a strong contender, whilst 2002 finalist Yannick Beaufils (France) and John 'Rusty' Wheeler (Australia) could also threaten.

Again, there is an international flavour to proceedings in the North-West as representatives of Malta, India, South Africa, the Reunion Islands and Mauritius will also feature.

The players and officials will be in store for a hectic few days as the action begins on Wednesday afternoon, although come the close of play Thursday night just the Semi-Finalists will remain. The Last 4 will then wait until the following Thursday to clash, with the final on Friday 29th.

The image above is courtesy of Beard Productions.